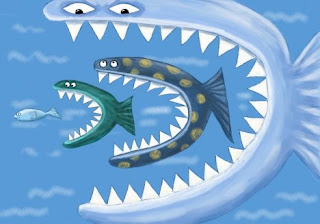 Next week, Drug Channels Institute will release our 2019 Economic Report on U.S. Pharmacies and Pharmacy Benefit Managers. It’s the tenth edition of our popular and comprehensive examination of the entire drug pricing, reimbursement, and dispensing system.

The exhibit below—one of 180 in our new report—provides a first look at the 15 largest pharmacies, ranked by total U.S. prescription dispensing revenues for calendar year 2018.

As you will see, vertical and horizontal mergers and acquisitions are reshaping the pharmacy and PBM industries—and enabling the big to get even bigger. I highlight some of the major transactions that affected our ranking.

For a sneak peek at the complete report, click here to download a free pre-publication draft overview (including the table of contents and a list of exhibits).

THE NEW ERA OF CONSOLIDATION 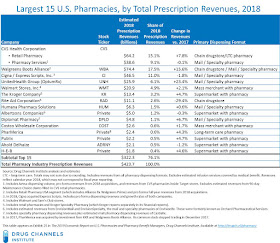 A number of significant mergers and acquisitions affected the 2018 revenues and growth rates for the largest companies:
In our 2019 Economic Report on U.S. Pharmacies and Pharmacy Benefit Managers, we analyze these and other developments about pharmacy dispensing channels, pharmacy benefit managers, third-party payers, patients’ financial contributions, rebates, reimbursement, and much more. It will be released on March 5, but is available for preorder now.

There are at least three reasons our estimated prescription revenue data may not correspond with figures from other public sources: