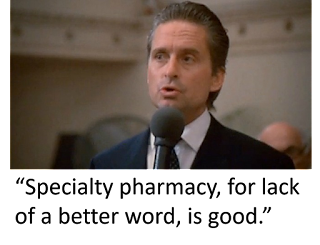 Let’s kick off 2019 with a quick review of last year’s specialty pharmacy mergers and acquisitions (M&A). Our list (below) includes only deals that were publicly announced in 2018.

Diplomat Pharmacy was uncharacteristically quiet during 2018, though it had been one of the most active acquirers in previous years.

The market for the buying and selling of specialty pharmacy and infusion services companies remains active. This chart shows the Braff Group’s count of M&A transactions since 2011. 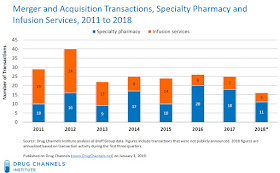 Below is our list of specialty pharmacy transactions that were publicly announced in 2018. There were 11 such deals announced in 2018, compared with 8 in 2017 and 14 in 2016. Transactions are listed alphabetically by the acquirer’s name.
In 2017, BioMatrix itself had been purchased by ACON Investments and Triton Pacific
Capital Partners.
Please email me if I omitted any transactions.

We’ll have a complete update on the state of specialty pharmacy in our forthcoming 2019 Economic Report on U.S. Pharmacies and Pharmacy Benefit Managers, which will be available on March 5.

In the meantime, savor the immortal—and still relevant—words of Gordon Gekko in his famous speech. Click here if you can’t see the video.