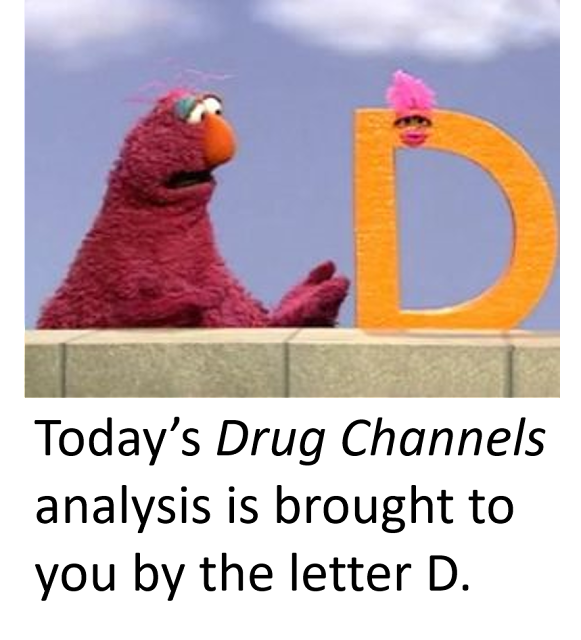 Our exclusive analysis of these numbers finds that for 2019, 88.4% of seniors are enrolled in PDPs with preferred pharmacy networks. That’s a drop from last year's figure of 99.9%.

Below, we use the new enrollment data to analyze the major pharmacy chains’ position within the 22 major Part D plans that have preferred networks. As you will see, in 2019 CVS again looks poised to capture market share from Walgreens and Walmart, both of which lost position in this year’s networks. Kroger remains a major player, while Rite Aid holds a distant fourth place behind its peers.

One more fun fact about 2019 enrollment: CVS Health’s SilverScript Allure, the first Part D plan with point-of-sale (POS) rebates for brand-name drugs, bombed. Was it a noble experiment or an unappealing option designed to enroll few seniors in a plan design that CVS opposes?

You can find data on Prescription Drug Plan (PDP) enrollment here: Medicare Advantage/Part D Contract and Enrollment Data. These data include enrollments accepted through December 7, 2018—the date that the open enrollment ended—so they appropriately reflect 2019 trends.

Our final sample included 81 Part D plans, operating 901 regional PDPs. For 2019, the share of PDPs with a preferred network declined to 92%, from 99% in 2018. It’s therefore no surprise that the share of PDP beneficiaries enrolled in a preferred plan also declined, from 99.9% in 2018 to 88.4% in 2019. Per our October analysis, the decline occurred primarily because two Humana plans switched from preferred to open networks for 2019.

In Battle Royale: CVS and Kroger Gain, Walgreens Slips in 2019 Part D Preferred Pharmacy Networks, we examined pharmacy participation in the 24 major multi-regional Part D plans. Based on the new enrollment figures, these plans enrolled 19.5 million people, or 94% of the total beneficiaries enrolled in a stand-alone Part D plan. The 22 plans with preferred networks enrolled 17.1 million people, or 93% of those enrolled in a plan with a preferred network.

We can use these data to measure the major retail chains' positions in the 2019 preferred networks. The chart below shows the total enrollment in the plans for which each chain is a preferred pharmacy. For comparison, we include data from our 2017 and 2018 analyses of enrollment. 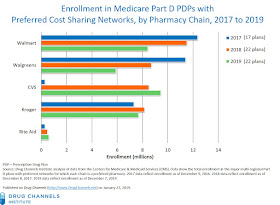 The data quantify the relative position of the major retail chains:
UNALLURING

The plan provides beneficiaries with an unspecified portion of manufacturer rebates on certain brand drugs, a preferred network, and a much higher premium than other plans. It’s notable because CVS has stated that it “strongly opposes any policy that would mandate the application of any percentage of drug manufacturer rebates or pharmacy price adjustments at POS.” (Read this CVS Health comment letter.)

As I wrote last October, I suspect that Allure was designed to be an intentionally unattractive plan, especially since there was no disclosure about the share of rebates being passed through. That said, CMS seems committed to changing the rebate system, so I expect other plans to offer innovative designs for 2020.