Drug Prices Are NOT Skyrocketing—They’re Barely Growing at All

Too many politicians and journalists remain committed to the false narrative of “skyrocketing” and “soaring” drug prices.

By contrast, IQVIA data reveal that list prices for brand-name drugs grew by less than 6% in 2018. What’s more, net prices (after rebates and discounts) increased by only 1.5%. The 2018 figures mark the fourth consecutive year that net drug prices have grown by low-single-digit amounts.

I recognize that relying on “facts” and “data” has become unfashionable. But I simply don’t understand how we can build sound public policies based upon inaccurate perceptions. As the late senator Daniel Patrick Moynihan said: "Everyone is entitled to his own opinion, but not his own facts." I doubt this principle will guide today's congressional hearings.

IQVIA is an independent organization that collects and reports data on pharmaceuticals. Its valuable new report—The Global Use of Medicine in 2019 and Outlook to 2023—is full of fact-based insights about global pharmaceutical use and spending.

Here’s a quick refresher on relevant terminology from the report:

IQVIA reports changes in invoice prices, the amounts that pharmacies and hospitals pay to drug distributors. These invoice figures include prompt-payment and volume discounts, but exclude off-invoice discounts and rebates separately paid to insurers and price concessions paid to patients or other health system participants. Therefore, changes in invoice and list prices for brand-name drugs are very highly correlated.

The chart below shows invoice and net price changes for established brand-name products—those that are more than two years old and have not yet faced generic competition. 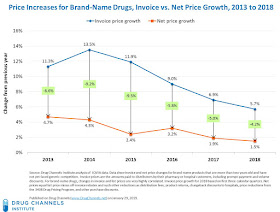 These data show significant gaps between list and net price changes. Three things to note:
A big consequence: Drug spending has been growing slowly. That’s because (1) rebates and discounts have offset much of the list price increases, (2) net brand-name drug prices have grown slowly, and (3) generic utilization is increasing.

As I note in Drug Prices After the Midterms: Five Crucial Implications of Pharmacy Benefit Design, more and more patients taking prescription drugs aren’t benefiting from ever-growing rebates and the slow growth in list prices. Many Americans now pay a coinsurance percentage of a prescription’s list price, or when they are within a deductible, even the entire list price.

Later today, we’ll have the spectacle of two Congressional hearings:
Here’s a fun game. Take a shot of tequila every time a politician (falsely) refers to drug prices as “skyrocketing” or “soaring.” You’ll be drunk before the first witness finishes testifying.