CMS Considers Point-of-Sale Pharmacy DIR: Another Prelude to a World Without Rebates? 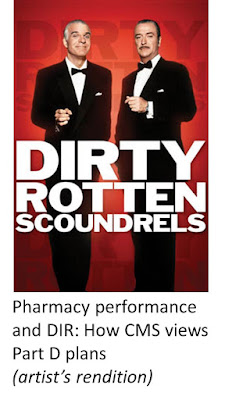 Last week, the Centers for Medicare & Medicaid Services (CMS) released a new rule for Medicare Parts B and D. It proposes changes to protected classes, e-prescribing, and other issues. Links and background below.

Notably for the Drug Channels audience, CMS also announced that it is considering—but not yet formally proposing—changes to how pharmacy price concessions are handled within Medicare Part D. These payments currently function like pharmacy rebates to Part D plans. They are therefore considered to be direct and indirect remuneration (DIR) and often called “DIR fees.”

Thanks to new CMS disclosures, we can now see why pharmacy owners hate these payments. Pharmacy DIR was $4 billion in 2017—about 1.5% of the retail pharmacy industry’s prescription revenues.

As I explain below, pharmacy DIR negatively affects the Medicare program and its beneficiaries in a manner similar to the impact of the rebates that manufacturers pay to plans. CMS wants the pharmacy DIR passed through to beneficiaries at the point of sale, i.e., when a prescription is dispensed.

Below, I explain this proposal, provide DCI's new analysis of DIR, and review the financial impact on drug channel participants. Keep in mind that the CMS proposal would *not* eliminate DIR fees or alter the financial impact of these payments on pharmacy profits. However, it’s clear that CMS wants plans and PBMs to change how these fees are computed and levied.

Pharmacy DIR is an important issue, because CMS is sharing some its views for a world without Part D rebates. The tough political question: Should taxpayers spend more to fix this problem?

These price concessions, which are collected from pharmacies after claim adjudication, are considered direct and indirect remuneration (DIR) under federal requirements. Pharmacies therefore refer to these amounts as DIR fees. However, DIR is a much broader term that encompasses various types of payments made to a Part D sponsor. See the list in DIR Fees, Rebates, Pharmacy Economics, and the Future of Medicare Part D.

The chart below provides our latest estimates of DIR and its major components. Note that in last week’s proposed rule, CMS for the first time disclosed the value of pharmacy price concessions. 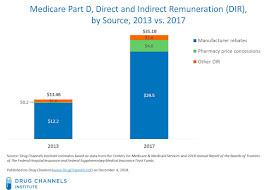 Briefly, Part D plans base pharmacy DIR on quantitative performance criteria applied to pharmacies. The pharmacy earns less reimbursement—and pays a higher price concession—when it achieves lower levels of performance on quantitative metrics of quality. Conversely, the pharmacy would earn an incentive payment for better performance. The specific criteria and thresholds are different for every plan and not publicly available.

CMS is also concerned that “…the one-sided nature of the pharmacy payment arrangements that currently exist also creates competition concerns by discouraging independent pharmacies from participating in a plan’s network and thereby increasing market share for the sponsors’ or PBMs’ own pharmacies.”

Put another way: CMS is implicitly accusing plans of “heads I win, tails you lose” performance plans. CMS is even “considering an option to develop a standard set of metrics from which plans and pharmacies would base their contractual agreements.” That’s one key reason that pharmacy groups have praised the potential policy.

CMS believes that pharmacy DIR fees distort the Medicare program and disadvantage beneficiaries. It’s worth understanding this reasoning, because it also undergirds CMS’s thinking about rebates.

Here’s the crucial issue: Performance-based DIR fees are not generally incorporated into the “negotiated price” between a pharmacy and plan sponsor. This price is formally defined in regulation (CFR 423.100) as follows:

CMS highlights four major reasons it wants to reconsider the “reasonably determined” exception regarding pharmacy DIR:
These four reasons echo CMS’s previous comments how rebates affect the Part D program. These effects, however, are much smaller for pharmacy price concessions than they are for manufacturer rebates.

To address these issues, CMS is considering a policy by which the lowest expected reimbursement be incorporated into the negotiated price, i.e., passed through at point-of-sale. CMS believes that it can make this change by regulation, without further rulemaking. As I understand the situation, that’s not true for any changes to way in which plans and PBMs handle rebates.

In practice, CMS suggests that the negotiated price would reflect the reimbursement received by the worst-performing pharmacy—the one paying the greatest price concession to a plan. CMS refers to this approach as the “lowest possible reimbursement” approach. You can review its logic and the mechanics, starting on page 92 of the proposed rule.

CMS has projected that the 10-year impact on beneficiaries, manufacturers, and the government if all pharmacy DIR were passed-through. Here’s a look at Table 10, which appears on page 150 of the document:

My summary of the mechanics behind the estimates:
These outcomes—higher government costs and lower manufacturer payments—create political challenges for point-of-sale pharmacy DIR. Pharmacies will cheer the change, while plans will criticize it. Meanwhile, the patient impact is mixed. An unknown number of patients will benefit from lower out-of-pocket costs, but a possibly larger number of patients will see slightly higher monthly premiums.

A move to point-of-sale pharmacy DIR takes us one small step closer to drug channel sanity—and possibly a system without rebates.