For 2017, drug spending grew by a mere 0.4%—significantly below the growth of spending on hospitals, physician services, and overall national healthcare costs. These latest CMS data confirm the drug spending slowdown that I have highlighted in previous Drug Channels articles.

Too many people—including politicians, journalists, and a certain billionaire—have committed to a false narrative of “skyrocketing” drug spending. Hmm, I don’t recall any of them ranting about “hospital prices” or “physician salaries”—two categories that together account for six times as much healthcare spending as outpatient drugs. Perhaps that's because despite the aggregate spending disparity, consumers (voters) spend a lot more out-of-pocket on pharmaceuticals than what they spend out-of-pocket on hospital care.

Alas, I must again note that demonizing pharmaceuticals as the prime driver of U.S. healthcare spending is simply false. See what you think.

Total U.S. spending on healthcare was $3.5 trillion in 2017, as measured in the National Health Expenditures (NHE) accounts. The chart below shows that the nearly $2.1 trillion (59.1%) in total healthcare expenditures in 2017 came from the two largest categories: hospital care and professional services (physicians, dentists, and other healthcare professionals). The chart also shows the share of national health spending for the three largest spending categories during the past 40 years. 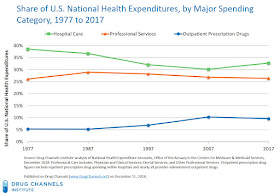 The share of spending on outpatient prescription drugs has remained a relatively small part of overall U.S. healthcare expenditures. For 2017, prescription drugs accounted for 9.5% of U.S. healthcare spending, consistent with its share of about 10% of total U.S. spending over the past 15 years. (Drugs' share peaked when the Medicare Part D program launched in 2006, at 10.4% of U.S. spending.)

In other words, spending on hospital care and professional healthcare services were more than six times larger than spending on prescription drugs. Is it any wonder that hospitals and physicians are always looking to shift blame to drugmakers for higher healthcare spending?

This drug spending slowdown is consistent with the data from the largest pharmacy benefit managers (PBMs) shown in Who Best Managed the Drug Spending Slowdown in 2017: CVS Health, Express Scripts, MedImpact, or Prime Therapeutics?

In its Health Affairs article, CMS attributed the 2017 slowdown in drug spending to the following factors:
The Health Affairs article doesn't call out rebates. But those payments are a major reason why manufacturers get far less than list price for their drugs. (See Payer Power: Why Eli Lilly, Janssen, and Merck Deeply Discount Their Drug Prices.) 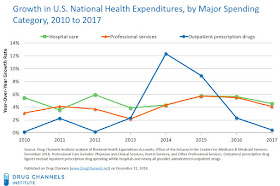 The only exceptions occurred in 2014 and 2015, due to strong growth in spending for drugs used to cure hepatitis C. (Yes, cure.) Post-rebate net costs for those drugs have plummeted due to competition—though patients don’t always benefit from these rebates. See 2019 Express Scripts Formulary Exclusions: Hepatitis C Changes Show Why the Drug Channel Must Change, Too.

Novel but costly new therapies garner lots of breathless reporting. These drugs, however, treat ultra-small patient populations and have had a limited impact on overall spending. Sadly, many journalists publish misleading stories that confuse the public about pharmaceutical’s true role in healthcare spending.

In 2017, consumers’ out-of-pocket expenses—cash-pay prescriptions plus copayments and coinsurance—accounted for 14% of spending and grew by only 0.1%. But as I note in Drug Prices After the Midterms: Five Crucial Implications of Pharmacy Benefit Design, some patients end up paying a much greater share of costs due to pharmacy benefit designs.

Consumer’s out-of-pocket spending for outpatient prescriptions in 2017 was $46.7 billion. Oddly, that figure is almost $13 billion higher than the $33.9 billion in consumers’ out-of-pocket spending for hospital care. That discrepancy occurred despite the fact that spending on hospital care was more than $800 billion higher than prescription drug spending. This benefit design discrepancy partly explains why politicians attack pharma companies over hospitals.

Regular readers know the unofficial motto of Drug Channels: "Everyone is entitled to their own opinion, but not their own facts." I hope—but doubt—that the latest NHE data will bring balance to the public discussion of U.S. healthcare spending.