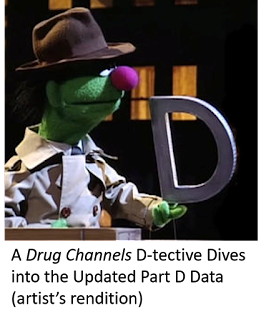 The Centers for Medicare & Medicaid Services (CMS) has recently released the initial raw data on the 2019 Medicare Part D plans.

Our exclusive analysis of these data reveals that preferred cost sharing pharmacy networks will be slightly less popular next year. For 2019, 92% of Medicare Part D regional prescription drug plans (PDP) will have a preferred network. This figure compares with 99% of plans in 2018. The decline will occur primarily because two Humana plans will switch from preferred to open networks for 2019.

Below, I provide historical context on preferred networks’ growth and then discuss the top nine companies behind the 2019 plans. As you will see, narrow pharmacy networks are now an essential and established component of Part D benefit design.

Especially notable will be CVS Health’s SilverScript Allure, the first Part D plan with point-of-sale (POS) rebates for brand drugs. Is Allure the next generation of Part D plan design, or an unattractive offer that helps CVS stop a mandated policy shift that it opposes?

A preferred network gives consumers a choice of pharmacy while providing them with financial incentives to use the pharmacies that offer lower costs or greater control to the payer. A consumer with a preferred network benefit design retains the option of using any pharmacy in the network. However, the consumer’s out-of-pocket expenses will be higher at a non-preferred pharmacy.

To identify the 2019 Part D preferred cost sharing pharmacy networks, I used the 2019 Drug and Health Plan Data and the 2019 PDP Landscape Source Files (v 10 01 18). My analysis includes only stand-alone PDPs. I eliminated the following plans from the sample:
My final sample included 81 plans, which operate 901 regional PDPs: 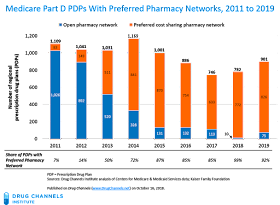 For more on the economics and strategies of narrow network models, see Chapter 7 of our 2018 Economic Report on U.S. Pharmacies and Pharmacy Benefit Managers.

Next time, I’ll examine what we can deduce from retail chains’ participation in the major preferred networks.