As with everything in the U.S. drug channel, there’s more to this transaction than meets the eye.

I have provided perspectives on the Cigna-Express Scripts deal in these Drug Channels articles:
And I wonder if Cigna will have buyer’s remorse if we move to a world without rebates, a la The Drug Channels Negotiated Discounts Model. 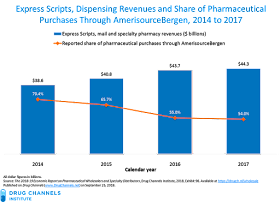 The revenue figures above are based on Express Scripts’ calendar year financial reporting. We therefore computed Express Scripts pharmacy revenues to correspond to ABC’s fiscal year.

The Cigna deal will likely provide a small incremental upside for ABC and a corresponding downside for McKesson:
THE WALGREENS CONNECTION

Walgreens Boots Alliance (WBA) will also play a role in this story.

There are two noteworthy connections between WBA and Express Scripts:
Meanwhile, Walgreens has an opportunity to expand its Medicare Part D partnerships with a combined Cigna-Express Scripts organization:
Walgreens is also tightly connected to AmerisourceBergen. It accounts for more than one-third of ABC’s revenues, it owns 26% of ABC’s outstanding common stock, and controls one director on ABC’s board. 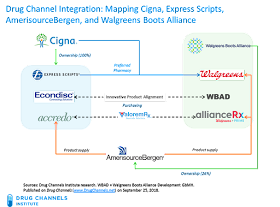