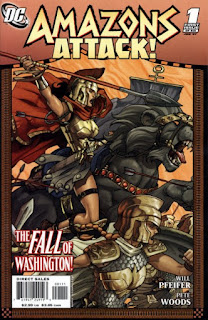 It’s official! After more than a year of speculation and rumors, Amazon has entered the pharmacy business with its acquisition of PillPack, a small mail pharmacy. Consider this move to be the end of the beginning for the pharmacy industry's evolution.

Below, I offer my initial observations on the transaction and its impact.

But let’s all keep some perspective here. This is a small first step that will let Amazon begin growing a pharmacy dispensing business.

We are still a long, long way from a fundamental restructuring of the complex U.S. drug channel. The incumbents still have opportunities to defend their position, capture value from internet technologies, and streamline distribution. However, the prospects of a retail pharmacy shakeout over the next 10 years have just increased.

Here is Amazon’s official press release on the transaction: Amazon to Acquire PillPack.

For readers who don’t know PillPack, here’s a pithy summary from The New York Times:


PillPack, founded in 2013, an online pharmacy that distributes its pills in easy-to-use packages designed for consumers with chronic conditions and multiple prescriptions, has long been seen as a potential target for larger businesses, including Amazon and Walmart, which were looking to expand their reach in online drug sales. PillPack is an innovative but not necessarily major player in the pharmacy world, bringing in about $100 million in revenue in 2017, according to the company.

For context, consider our Drug Channels Institute summary of the pharmacy industry’s economic structure. In 2017, there were about 64,000 retail, mail, long-term care, and specialty pharmacies, which dispensed 5.8 billion 30-day equivalent prescriptions and generated prescription revenues of $412.6 billion. More than $138 billion of those revenues came from dispensing specialty drugs. This chart appears as Exhibit 21 in our 2018 Economic Report on U.S. Pharmacies and Pharmacy Benefit Managers 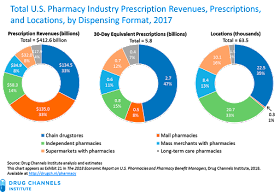 1. Amazon has made a small, partly defensive move into pharmacy dispensing.


Over the past year, Amazon has appeared to struggle with the operational and regulatory hurdles of building a mail pharmacy. Acquiring a functional mail pharmacy was the most logical way of quickly entering pharmacy dispensing. I even tweeted in early April about the possibility of an Amazon-PillPack deal. The acquisition also maintains Amazon’s focus on consumer retailing solutions.

According to CNBC, Amazon snatched the deal away from a dithering Walmart. Check out this article: Amazon swooped in to buy PillPack for around $1 billion after Walmart dragged its feet. Ouch. That’s gotta hurt.

Last May, I rated “Become a central-fill mail pharmacy in a third-party payer’s network” as a less likely strategy for Amazon. Oh, well. If you live by the crystal ball, you must be prepared to eat broken glass!

2. Amazon now has a turnkey platform for disrupting the cash-pay prescription business.


I’ve long believed that Amazon has had a major opportunity with the prescriptions purchased by the uninsured and underinsured population. See my analysis in Why Retail Pharmacies Still Overcharge Uninsured Patients—And What That Means for Amazon.

As I Told CNBC yesterday:


"The pharmacy industry has entered its next phase of evolution," said Adam Fein, CEO of Pembroke Consulting's Drug Channels Institute. "Retail pharmacies will find their high-profit cash business under pressure. Expect a pharmacy shakeout over the next five years."


For distribution of consumer products, mail shipment is rapidly displacing retail stores. Yet mail pharmacies have experienced a sharp decline in the number of prescriptions dispensed. Multiple factors have contributed to this decline, including retail pharmacies’ willingness to cut prices to drive store traffic and states’ anti-mandatory mail order legislation. (For a more complete discussion of mail pharmacy, see Section 2.3.6. of our 2018 pharmacy/PBM report.)

As I’ve noted above, consumers often choose mail pharmacies primarily for insurance-related reasons. Consequently, payers and PBMs are not genuinely motivated to create an awesome consumer experience. Many mail pharmacies have middling customer satisfaction scores, though some rank higher in customer satisfaction than do chain drugstores and mass merchants with pharmacies. See the J.D. Power 2017 U.S. Pharmacy Study. I suspect most Prime members would be willing to purchase via an Amazon mail pharmacy—if the out-of-pocket price via their insurance is right.

It’s premature to consider Amazon’s other delivery options, which include Whole Foods stores, lockers, local grocery delivery staff, drones, and just about any other way to move something from one place to another. I await the breathless speculation about these alternatives.

4. PBMs face the prospect of disruption to their long-favored network strategies.

PillPack is notable because it is an independent mail pharmacy that has been included in third-party payers’ pharmacy networks. It dispenses 30-day prescriptions, not the more-common 90-day maintenance prescriptions. In 2016, PillPack publicly battled Express Scripts—and won—after the PBM terminated its network agreement.

Amazon must maintain relationships with PBMs to continue handling third-party paid prescriptions. I doubt, however, that many PBMs would be willing to block an Amazon-owned mail pharmacy. Will Amazon begin pressuring PBMs and payers to change their business practices and open up their pharmacy networks?

5. Amazon still lacks a specialty pharmacy solution—and may not want one.

PillPack, however, does not help Amazon penetrate the higher-touch business of dispensing specialty pharmaceuticals. Amazon faces a payer challenge here, too. The largest specialty pharmacies are all owned or co-owned by a PBM and account for a majority of prescription revenues from pharmacy-dispensed specialty drugs. See The Top 15 Specialty Pharmacies of 2017: PBMs and Payers Still Dominate.

Perhaps Amazon will buy a large independent specialty pharmacy such as Diplomat, Avella, BioPlus, SenderraRx, or PANTHERx. Even so, it would still struggle to compete profitably with payer-owned specialty pharmacies and would need to maintain access to manufacturers’ limited dispensing networks.

6. The deal is good news for vertical integration.


As I see it, the Amazon-PillPack deal makes it slightly more likely that the Justice Department will approve the pending CVS-Aetna and Cigna-Express Scripts mergers. Despite the Amazon hype, executives should be getting ready to adapt to a vertical healthcare world, per my comments about the medical-pharmacy future in March. That's the real story for the immediate future. 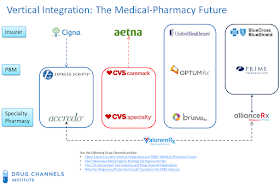 Here’s a final thought from Peter Drucker: “Nothing worthwhile in business was ever accomplished unless it was done by a monomaniac on a mission.”