Employer Pharmacy Benefits in 2017: More Cost-Shifting to Patients As Tiers and Coinsurance Expand 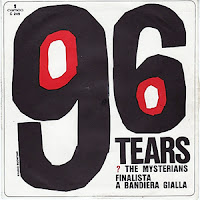 It’s time for our annual analysis of the Kaiser/HRET 2017 Employer Health Benefits Survey, which you can read online for free. The survey delves into employer-sponsored health coverage at more than 2,000 companies.

In the charts below, I summarize employers’ 2017 pharmacy benefits by examining (1) cost sharing tier structures, (2) average copayments, by formulary tier, (3) type of cost sharing (coinsurance and copayment), and (4) coinsurance structures. I’ll investigate the growing role of deductibles in a follow-up article.

This year’s results show massive cost-shifting for specialty drugs. For the first time, a majority of plans have four tiers. Economically-debilitating coinsurance—in some cases with no limit on out-of-pocket expenses—is common.

When people complain about “drug costs,” they are actually thinking about the share of costs that they pay. Last week, I highlighted Prime Therapeutics’ data showing very slow growth in post-rebate drug spending. Given the new Kaiser/HRET survey, it looks like patients may not always be getting the benefit of lower costs.

Read on for my analysis along with another annual Drug Channels tradition: tiers/tears puns!

TOO MANY TIERDROPS FOR ONE SAMPLE

The Kaiser Family Foundation and the Health Research & Educational Trust (Kaiser/HRET) conduct this annual survey of employer-sponsored health benefits. The 2017 report tracks health benefits at 2,137 firms. Two-thirds of the responding firms participated in either the 2015 or 2016 surveys, or both. Click here for the full methodology.

Drug Channels readers will be most interested in the survey data on Prescription Drug Benefits (section 9). If you prefer not to wade through the full report, please enjoy my highlights below.

For consumers with third-party pharmacy benefit insurance, a patient’s share of a prescription’s cost is usually linked to benefit cost tiers—categories that define a plan member’s copayment or coinsurance. In general, prescription drug plans financially reward patients for using generic and lower-tier drugs. They require the patient to pay progressively higher copayments or coinsurance for drugs on higher tiers. Allowing the beneficiary to pay less out of pocket for generic drugs, for example, supports the substitution of therapeutically equivalent generic drugs for brand-name drugs.

For more background on pharmacy benefits and comparisons between payers, see Chapters 5 and 6 of our 2017 Economic Report on U.S. Pharmacies and Pharmacy Benefit Managers.

Here are the Kaiser/HRET survey’s updated definitions for common terms used in the report and the charts below:
Note that I reproduced the definitions exactly as they appear in the report, despite the distressing lack of grammatical symmetry.

In 2017, the four-tier design became the most common option, used in 44% of employer-sponsored plans. In 2004, only 3% of covered employees were in plans with four or more tiers. The “four or more tiers” category includes plans that have a separate specialty tier—including any plans with 96 tiers. 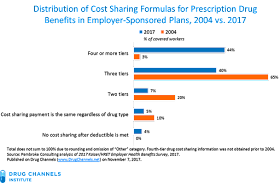 In the chart above, a small percentage of plans (5%) have the same cost sharing regardless of drug type. This results from the inclusion of employees in High-Deductible Health Plans with a Savings Option (HDHP/SOs), which have different cost sharing patterns for prescription drugs than do other plan types.


COME ON AND LET ME HEAR YOU CRY 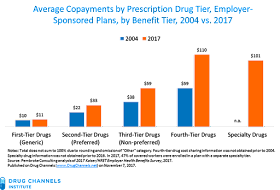 I WANNA HEAR YOU CRY 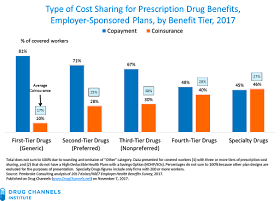 The chart below examines the distribution of coinsurance structures for the drugs on the fourth and specialty tiers. More than half of covered workers are in a plan that limits out-of-pocket maximum dollar coinsurance payments. However, one-quarter of workers have no out-of-pocket maximum for fourth-tier specialty drugs, and one-third have no limit for fourth-tier drugs. 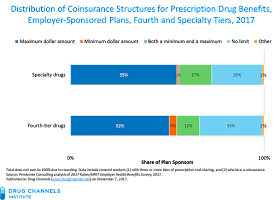 In a recent Morning Consult op-ed, Robert Goldberg of the Center for Medicine in the Public Interest referred to these benefit designs as “one of the most discriminatory features of our health care system: a prescription drug benefit design that maximizes profits but not health.”

Perhaps ? & The Mysterians are correctly forecasting how the number of pharmacy benefit tiers may expand. Click here if you can’t see the video.