Today, I examine independent pharmacies’ participation in 22 major 2018 Part D preferred networks. Our analysis focuses on the pharmacy services administration organizations (PSAOs) that represent these pharmacies in negotiations with plans.

Large pharmacies interact and negotiate directly with PBMs and other third-party payers. However, nearly all smaller pharmacy owners participate in pharmacy services administration organizations (PSAOs) to leverage their influence in contract negotiations with PBMs and other third-party payers. The PSAO relationship is crucial for independent pharmacies, because these pharmacies generate more than 90% of their total sales from prescription dispensing.

Pharmaceutical wholesalers own and operate the largest PSAOs as a service for their smaller pharmacy customers. Wholesalers’ corporate ownership provides a negotiating advantage for smaller drugstores. Here are the four largest PSAOs:
These PSAOs contract for more than 18,000 independent pharmacy locations. Note that a pharmacy typically must interact with a PBM through only one PSAO, although pharmacies can belong to multiple PSAOs.

For more on PSAOs and their services (along with a list of the nine largest PSAOs), see Section 2.2.4. of our new 2017–18 Economic Report on Pharmaceutical Wholesalers and Specialty Distributors.

Note that a PSAOs are unusual for being a four letter acronym (FLA) instead of the more traditional TLA.

The table below summarizes PSAO participation in these 22 major multi-regional Part D plans. The shaded boxes indicate a change in a PSAO's participation from 2017 to 2018. Sixteen plans were offered in both years. From our list, three plans will be new for 2018, and three plans will switch from open to preferred networks for 2018. 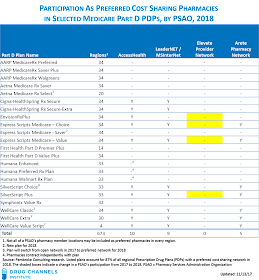 As you can see, pharmacies that belong to three of the four largest PSAOs will have preferred status in only a subset of plans. Independents will be absent as preferred pharmacies in more than half of the major plans. These PSAOs apparently decided that participation at reduced margins is better than having members excluded. (UPDATE: Per the comment below, Arete Pharmacy Network members will be preferred in the Express Scripts' Choice and Value plans. The table has been updated to reflect this information.)

Nine major plans from three major insurers—Aetna/First Health, Humana, and UnitedHealthcare (AARP and Symphonix)—do not have any independents participating as preferred pharmacies. The AccessHealth PSAO does not have a contract with Humana, so its pharmacy members must contract independently for both preferred and non-preferred status.

Notably, AmerisourceBergen’s Elevate PSAO did not contract for its members to be preferred pharmacies in the 22 major 2018 Part D plans. However, it did contract with some of the smaller plans that are among the 13% of PDPs not shown in the table above. Elevate member pharmacies can presumably contract individually for preferred status, though we have no readily accessible data to quantify such participation.

An Elevate spokesperson told me:


“We recognized that contracting for sustainable reimbursement rates is the only way for independent pharmacy owners to do business and continue to thrive. Our goal with Part D contracting is to offer Elevate Provider members broad patient access while balancing and protecting the pharmacy’s profitability. Selective participation and data-driven negotiating allows us to offer the right balance of competitiveness and profitability.

The choice to not participate is even further reinforced by the fact that independent pharmacies typically, due to their location, serve a higher percentage of patients who benefit from the Medicare Low Income Subsidy and would not realize any copay benefit from a pharmacy who participates in preferred plans.”

But to me, this statement mirrors CVS Health’s comments about selective participation in narrow networks. (I highlighted one part of this statement in last week’s post.) CVS has since dramatically reversed course after losing significant prescription market share. Will Elevate stay the course?

The 2018 Part D data highlight why preferred networks create competition. Individual pharmacies and their PSAOs can make business decisions about whether to not to participate in a network. Without a business advantage to discounting, then pharmacies won’t compete for a PDP’s business.

Three interrelated trends have now converged for the 2018 Medicare Part D plans: the dominance of preferred networks, the widely varying levels of pharmacy participation in these networks, and the scope of DIR fees.  Expect the political noise to get much louder as the 2018 plans roll out.
Adam J. Fein, Ph.D. on Thursday, October 26, 2017