What Will Happen to Rite Aid’s Struggling EnvisionRx PBM? 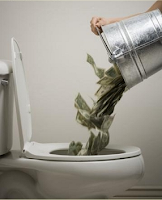 If the deal receives regulatory approval, Rite Aid will shrink to a multi-regional pharmacy chain with about half as many stores. It will, however, hold onto EnvisionRx, the pharmacy benefit manager (PBM) that it acquired in 2015.

Unfortunately, EnvisionRx remains a small, struggling regional PBM with limited growth. Its revenues in 2017 have been declining. There also appears to be no material synergies between Rite Aid’s retail pharmacy business and its Envision PBM.

Last week, Rite Aid disclosed that it will use $4.9 billion of its $5.5 billion windfall to repay debt. (Pro forma financials below.) Given the performance troubles that I outline below, I wonder whether investors will trust the current management team to spend the cash wisely.

Rite Aid’s Asset Sale Pro Forma Information investor presentation projects the company’s financial position after the asset sales to Walgreens Boots Alliance (WBA). The number of Rite Aid stores will drop by 48%, from 4,522 stores to 2,336 stores. The average revenue per store will increase by 6%. 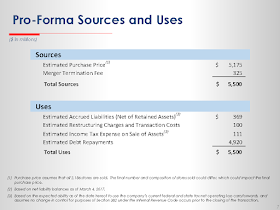 Here is the crucial slide that shows how Rite Aid will spend the $5.5 billion proceeds from the asset sale: 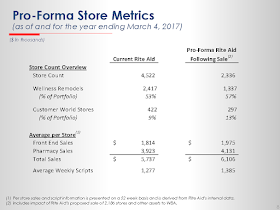 Note that the transaction is still subject to regulatory approval, which seems likely. The companies have presumably structured the transaction to address the Federal Trade Commission's concerns. The funds will effectively recapitalize Rite Aid and stabilize its finances.

When Rite Aid announced its February 2015 acquisition of EnvisionRx, I speculated that Rite Aid was attempting to build a mini-CVS Health. See Rite Aid-EnvisionRx: Initial Thoughts on the Deal.

At the time, I predicted that Rite Aid would create its own Maintenance Choice program. (It did. See below for what happened.) I also looked back on Rite Aid’s troubled history of owning PBMs and optimistically expected that EnvisionRx would break the curse. 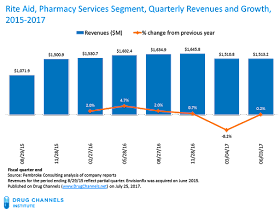 As you can see, revenues have been essentially flat. They declined in 2017, partly because EnvisionRx participated in fewer Medicare Part D regions. Rite Aid stated that this decision was “due to financial constraints.” Ouch.

In October 2015, Walgreens president Alex Gourlay referred to EnvisionRx as an “important but very small PBM business” that would “help us understand access in America better.” Stefano Pessina, our global channels overlord and executive vice chairman and chief executive officer of WBA, called EnvisionRx an “opportunity to learn.” See The Walgreens-Rite Aid Deal: Ten Things You Should Know.

Looks like Rite Aid’s management may be the ones who need to do some learning.

Recall that the premise of Rite Aid’s EnvisionRx acquisition was that it would help both businesses grow. Rite Aid’s June 2017 10-Q filing bragged about this theory:


“EnvisionRx enabled us to expand our retail healthcare platform and enhance our health and wellness offerings by combining EnvisionRx’s broad suite of PBM and pharmacy-related businesses with our established retail platform to provide our customers and patients with an integrated offering across retail, specialty and mail-order channels.”

A useful measure of such internal corporate synergy comes from Rite Aid’s reported Intersegment Eliminations. These amounts measure revenues whenever an EnvisionRx beneficiary fills a prescription at a Rite Aid pharmacy. When this happens, both the PBM and the pharmacy record the revenue from the prescription. (See Profits in the 2017 Fortune 500: Manufacturers vs. Wholesalers, PBMs, and Pharmacies for an explanation of this phenomenon.)

For instance, in August 2016, Rite Aid announced its Rx90 program. It allows an EnvisionRx beneficiary to obtain maintenance medications from EnvisionRx’s mail pharmacy as well as the retail pharmacy locations of Rite Aid, Walgreens, and Costco. (See our August 2016 news roundup.) The Rx90 model permits consumer choice of pharmacy channel (mail or retail) but limits the choice to specific retailers.

If synergies between Rite Aid’s PBM and pharmacy businesses were growing, then we’d expect reported Intersegment Eliminations to grow.

Alas, the numbers tell a different story. The chart below shows that the total value of intersegment revenues have actually shrunk since the EnvisionRx deal closed. 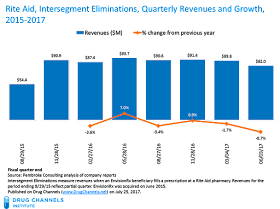 Intersegment revenues have also declined as a percentage of Rite Aid’s retail pharmacy prescription revenues. Intersegment revenues have dropped by 14 basis points, from a paltry 2.04% of retail pharmacy prescription revenues in the quarter ending 5/28/16 to an even more embarrassing 1.90% in the quarter ending 6/3/17.

To be fair, Rite Aid’s same-store prescription growth has lagged CVS and Walgreens since early 2015—months before the Walgreens deal was announced. (See this chart from For Walgreens, Narrow Network PBM Partnering Pays Off.)

Nonetheless, the non-synergies between Rite Aid and EnvisionRx remind me of something that I learned in graduate school many years ago: