The surprise announcement echoes the arrangement that OptumRx established with Walgreens. The new deal signals that CVS is starting to counter Walgreens’ aggressive partnering strategies. OptumRx customers also get to choose which chain will be their preferred 90-day at retail provider.

Below, I provide some context for the agreement and outline CVS Health’s two basic strategic options as it competes with Walgreens. I’m very curious to hear how CVS Health will spin this latest move during its upcoming analyst day, on December 15.

HOW WE GOT HERE

Plan sponsors are adopting narrow network models that increase 90-day-at-retail prescriptions. The chart below shows the prevalence of 90-day prescriptions by dispensing format. Over the past five years, 90-day prescriptions’ share at chain stores has nearly doubled, from 6.5% in 2010 to an estimated 12.0% in 2015. 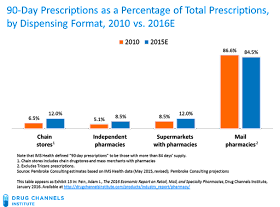 The OptumRx deal is an example of the second approach. It’s a logical quick fix that sacrifices some retail per-prescription profitability to gain scale. Expect similar moves as CVS works to shore up its retail pharmacy business. It clearly wants to avoid the fixed cost deleveraging of lost scripts that I described in my earlier post.

The structure of the OptumRx deal amps up retail competition. According to Steve Valiquette at bank of America Merrill Lynch, the OptumRx deal has one unusual twist. OptumRx customers will have to choose either Walgreens or CVS as the sole 90-day at retail pharmacy chain in the network.


“Our analysis shows that the amount of share we would gain would not make up for the margin we would give up so we chose not to participate.”

Even as the words were leaving his mouth, Walgreens was pursuing the opposite strategy. For 2017, Walgreens is the most active participant in the major Part D preferred networks, while CVS is barely participating as a preferred pharmacy. See Walgreens Plays to Win: Our Exclusive Analysis of 2017's Part D Preferred Pharmacy Networks.

Denton’s comment and the subsequent developments remind me of a crucial lesson that I learned after leaving grad school.

In theory, theory and practice are the same.

In practice, they are different.