EXCLUSIVE: Preferred Pharmacy Networks Are Back in 85% of the 2017 Medicare Part D Plans 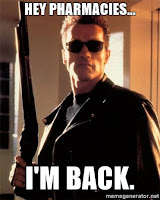 The Centers for Medicare & Medicaid Services (CMS) just released the initial data on the 2017 Medicare Part D plans. Our exclusive analysis reveals that preferred cost sharing pharmacy networks are back.

For 2017, 85% of Medicare Part D regional prescription drug plans (PDP) will have a preferred network. That’s comparable to the figures from the past three years.

Below, I provide historical data on preferred networks’ growth and then identify 2017’s top plans. The two largest companies—UnitedHealthcare and Humana—offer only preferred networks for 2017. Both companies are also offering co-branded plans with retail chains: United Healthcare with Walgreens, and Humana with Walmart.

Such narrow pharmacy networks—either preferred or limited models—are now an unstoppable and widely accepted element of benefit design. Pharmacies will continue to see their prescription profit margins terminated. In a future post, I’ll be back to examine which chains and independents are participating in the preferred networks.

Preferred network models have grown most rapidly within the Medicare Part D program, where CMS now calls them preferred cost sharing networks. CMS refers to the pharmacies in such a network as preferred cost-sharing pharmacies.

To identify the 2017 Part D preferred cost-sharing pharmacy networks, I used the 2017 Drug and Health Plan Data and the 2017 PDP Landscape Source Files (v 09 07 16). My analysis includes only stand-alone PDPs. I eliminated these plans from the sample:
I included the Cigna-HealthSpring Rx Secure and Rx Secure-Extra plans that are under sanction as of September 6, 2016. (This CMS memo explain the situation.) The CMS data provide information for these sanctioned plans, but the plans can’t accept new enrollees. These PDPs have preferred pharmacy networks and account for 68 plans.

My final sample included 71 plans, which operate 746 regional PDPs. Seventeen plans are being offered in all 34 regions, for a total of 578 PDPs (=17*34). The other 54 plans are operating in anywhere from 1 to 33 regions and account for 168 regional PDPs.

COME WITH ME IF YOU WANT TO PROFIT 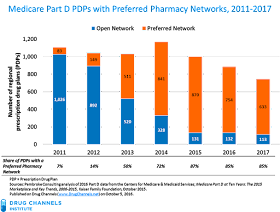 Here is a summary of the major companies that offer PDPs in 2017, along with the split of preferred cost sharing vs. open pharmacy networks. 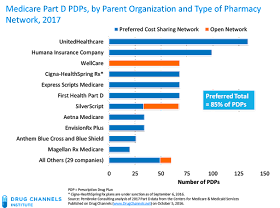 Due to consolidation and exit, there are fewer major plan sponsors. Here are the 2017 highlights from the major companies:
More payers will use tightly controlled pharmacy networks as they seek additional drug spending savings. The reduction in pharmacy profits is the biggest source of cost savings from narrow networks, because pharmacies have been willing to accept reduced reimbursement rates in exchange for participation in a preferred or limited network. For the economics of narrow network models, see Chapter 7 of our 2016 Economic Report on Retail, Mail, and Specialty Pharmacies. Section 7.2.4. (page 125) explains the controversial direct and indirect remuneration (DIR) fees.

Who will survive? As a wise philosopher once said: The future is not set. There is no fate but what we make for ourselves.