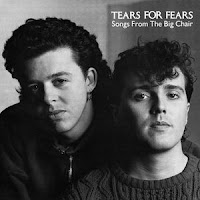 It’s time for our annual analysis of the Kaiser/HRET 2016 Employer Health Benefits Survey, which you can read online for free. The survey delves into employer-sponsored health coverage at 2,000 companies. In the charts below, I summarize employers’ 2016 pharmacy benefits by examining (1) cost-sharing tier structures, (2), average copayments, by formulary tier, and (3) type of cost-sharing (coinsurance and copayment).

This year’s results highlight the growing discrepancy between diseases that can be treated with traditional drugs and those that require specialty drugs. Traditional therapy classes that treat larger patient populations have multiple generic drug options and fixed dollar copayments.

Read on for full details along with some lovely tiers/tears puns.

EVERYBODY WANTS TO SURVEY THE WORLD

The Kaiser Family Foundation and the Health Research & Educational Trust (Kaiser/HRET) conduct this annual survey of employer-sponsored health benefits. The 2016 report tracks health benefits at 1,993 firms, 87% of which offer health benefits to employees. Nearly all (99%) covered workers in these plans have a prescription drug benefit. The survey’s sampling methodology is solid.

Drug Channels readers will be most interested in the survey data on Prescription Drug Benefits (section 9). For this year’s report, Kaiser/HRET revised how the survey asked employers about specialty drugs.

The Kaiser team told me that they were too busy to release a PDF of the whole report, so you’ll have to wade through a complex series of web pages to read the full results...or just enjoy my highlights below.

BENEFITS FROM THE BIG CHAIR

PBMs assemble Pharmacy and Therapeutics (P&T) committees to recommend a plan’s formulary—a list of prescription drugs approved for reimbursement by the plan sponsor contracting with a PBM. A P&T committee comprises pharmacists and physicians from various medical specialties. It meets at least quarterly to review and recommend formulary updates and to consider new drugs based on scientific evidence and clinical standards of practice.

To encourage compliance with the formulary, drugs are classified into benefit cost tiers—categories that define a plan member’s copayment or coinsurance. In general, prescription drug plans financially reward patients for using generic and lower-tier drugs. They require the patient to pay progressively higher copayments or coinsurance for drugs on higher tiers. Allowing the beneficiary to pay less out of pocket for generic drugs, for example, supports the substitution of therapeutically equivalent generic drugs for brand-name drugs.

For more background on pharmacy benefits ad comparisons between payers, see Chapter 6 of our 2016 Economic Report on Retail, Mail, and Specialty Pharmacies.

Here is how the Kaiser/HRET survey defines some common terms:
The survey did not define “specialty drugs” in a manner comparable with the above definitions. The text merely states: “Specialty drugs such as biologics may be used to treat chronic conditions and often require special handling and administration.” Per Exhibit 9.13 from the report, 98% of covered workers at large firms work for employers whose largest health plan provides coverage for specialty drugs.

In 2016, the three-tier design—generic drugs, preferred brand-name drugs, and nonpreferred brand-name drugs—remained the most common option, used in more than half of employer-sponsored plans. Plans with four or more tiers have grown substantially. In 2004, only 3% of covered employees were in plans with four or more tiers. By 2012, the figure was 14%, But in 2016, 32% of employees were in such plans. 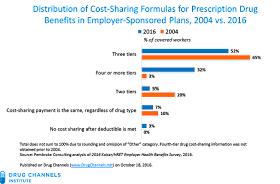 In the chart above, a small percentage of plans have the same cost sharing regardless of drug type (10%). This results from the inclusion of employees in High-Deductible Health Plans with a Savings Option (HDHP/SOs), which have different cost-sharing patterns for prescription drugs than do other plan types.

Most (about 90%) covered workers with a general annual deductible are in plans that do not require workers to meet the deductible before they receive prescription drug benefits. (See Exhibit 7.26 from the report.) 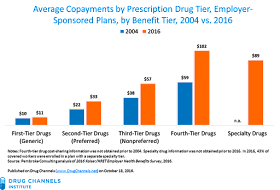 SOWING THE SEEDS OF DISCRIMINATION

Coinsurance is more common on higher tiers. About one-quarter of covered workers in employer-sponsored plans face coinsurance for drugs on the second and third tiers, and 46% have coinsurance for fourth-tier drugs. In plans with a specialty drug tier, 46% also used coinsurance on that tier. 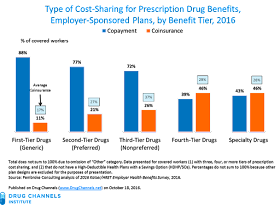 Coinsurance rates for fourth-tier drugs average 29%. For specialty drugs, they average 26%. This means that on average a patient would pay about $1,000 for a specialty prescription of about $3,500. Most covered workers are in a plan that limits out-of-pocket maximum dollar coinsurance payments, but one in five workers is in a plan with no out-of-pocket maximum for fourth-tier and specialty drugs.

THESE ARE THE THINGS I CAN DO WITHOUT

When it comes to drug pricing, many people point to outliers like Martin Shkreli, Valeant, and EpiPens and argue: “It’s a mad world.” But the real story has more to do with benefit designs that seem to undermine basic principles of insurance.

As the all-knowing Wikipedia states: “Insurance is a means of protection from financial loss. It is a form of risk management primarily used to hedge against the risk of a contingent, uncertain loss.” Put another way, insurance should offer more than just having your employer cover the $10 monthly cost of your statins. It should also offer protection if you are unfortunate enough to require treatment for a rare and serious condition.

The prevalence of high cost-sharing for certain specialty drugs has led to accusations of adverse tiering, a practice by which an insurer would deter certain populations from signing up for coverage. The Center for Health Law and Policy Innovation of Harvard Law School (CHLPI), for example, has just filed formal administrative complaints with the U.S. Department of Health and Human Services’ Office for Civil Rights (OCR) regarding insurance discrimination against people living with HIV and other chronic conditions. (source) The Biotechnology Innovation Organization (BIO), which represents biotechnology companies and others, has launched a campaign to highlight “what the insurance industry is doing to reduce patient access” to therapeutic breakthroughs. (source)

Welcome to your life. There’s no turning back. Even if you find your employer not acting on its best behavior.

In the meantime, please enjoy this inscrutable 80s music video.