For better or worse, Mylan’s EpiPen controversy has started an intriguing dialogue about my favorite subject: the economics of U.S. drug channels. Many news stories have tried to explain how a prescription drug’s list price differs from the ultimate net price paid by insurers and the government. A few brave souls have even dug into the role of such intermediaries as pharmacy benefit managers (PBMs), wholesalers, and pharmacies.

Below, I highlight aspects of the EpiPen story that raise crucial questions about our healthcare system, including: Who benefits from big gross-to-net spreads in drug prices? How do benefit design and payer decisions alter channel economics? Are patients benefiting from manufacturer’s rebates to PBMs? How (if at all) should manufacturers alter their pricing strategies?

And I wonder: Will we look back on the EpiPen incident as the beginning of the end for manufacturers’ gross-to-net drug pricing models and PBMs’ traditional role in the flow of rebates?


Bresch: So look, no one's more frustrated than me. I've been in this business for 25 years.

Brian Sullivan (CNBC): But you're the one raising the price, though. How can you be frustrated?

Bresch: My frustration is there's a list price of $608. There is a system. There are – I laid out that there are four or five hands that the product touches and companies that it goes through before it ever gets to that patient at the counter. No one – everybody should be frustrated. I am hoping that this is an inflection point for this country. Our health care is in a crisis. It's no different than the mortgage financial crisis back in 2007. This bubble is going to burst.

Mylan also released the following chart, which shows that $334 of EpiPen’s $608 list price, or 55%, is absorbed by the drug channel. 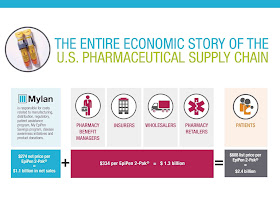 Mylan’s chart implies that each of the four channel participants got an equal share of the $334. In reality, most of the money went to payers, not to PBMs, wholesalers and pharmacies. PBMs collected the rebates but I estimate that PBMs pass back to payers about 90% of total rebate dollars, regardless of form, received from brand-name pharmaceutical manufacturers. As I show in Solving the Mystery of Employer-PBM Rebate Pass-Through, that average may not reflect the experience of any individual payer.

Many in the media tried to follow the dollar in the Mylan chart. Check out this NBC News story Or watch CNBC do an unexpectedly decent job explaining the drug channel in this video clip.

Mylan was obviously trying to deflect attention from its price increases. But EpiPen's economics raises a legitimate point in an era of high deductibles: Did your insurance company get a rebate on the EpiPen for which you paid full retail price?

Many people face deductibles, which means they are exposed to the list price. The percentage of employer-sponsored health plans with pharmacy benefit deductibles has doubled, from 23% in 2012 to 46% in 2015. Here’s Exhibit 80 from our 2016 Economic Report on Retail, Mail, and Specialty Pharmacies. 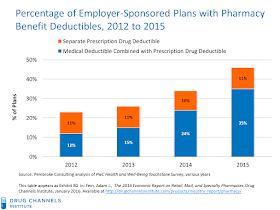 Matthew Harper at Forbes wrote a great article on this subject: The Insurance Rip-Off At The Heart Of The EpiPen Scandal.  Here’s a brief excerpt which includes a comment from yours truly:


Until you’ve hit your deductible, you may not get to enter the magical land of the PBMs. Maybe there’s a discount on that $608 EpiPen two pack, but you won’t see those rebates. Says Adam J. Fein, of Pembroke Consulting, an advisor to drug companies: “There are rebates being provided, but your insurance plan may not share them with you.”

Fein, who blogs about the drug distribution channels at drugchannels.net, thinks this may be what caused the whole Mylan mess. “They didn’t understand the insurance market had changed, and many of the people on their products were on high-deductible plans,” he says. “They were exposed to the full retail price even though Mylan may have been providing rebates to third party plans.”

These consumers were getting a raw deal. They were being exposed to Mylan’s price increases and excluded from the market forces that might cushion them. They were getting ripped off. And it’s no wonder they got angry.

In Drug Prices, Manufacturer Rebates, and the Risk to Channel Economics, I posed a Drug Channels Zen koan for you: When does a price increase not increase the price?

One answer: When a third-party pays for a prescription drug.

IMS Health has done a great job documenting the growing divergence between gross sales and net sales. As the chart below shows, manufacturers retain a smaller share of their price increases. In 2015, list prices grew by 12.4%, but net prices after rebates grew by only 2.8%. (I discuss the chart in Key Insights on Drug Prices and Manufacturer Rebates from the New 2015 IMS Report.) 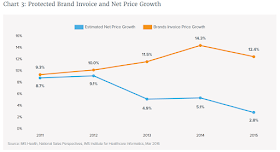 The IMS chart tells a similar story to the Mylan chart above. Mylan is explaining a discrepancy between an EpiPen’s gross list price of $608 and the net price of $274 that Mylan receives.

Last week, Brent Saunders, CEO of Allergan, picked up on the theme of pricing and rebates in his widely-read blog post Our Social Contract with Patients. To me, this is the most interesting and disruptive part of the Allergan statement:


“Where we increase price on our branded therapeutic medicines, we will take price increases no more than once per year and, when we do, they will be limited to single-digit percentage increases. Our expectation is that the overall cost of our drugs, net of rebates and discounts, will not increase by more than low-to-mid single digits percentages per year, slightly above the current annual rate of inflation.”

Scott Gottlieb at the American Enterprise Institute goes even farther in How Congress Can Make Drug Pricing More Rational. He argues that Congress needs to "enact legislation that would address the judicial precedent that gave rise to this purposely-intricate system of rebates."

Alas, our system will be incredibly hard—and perhaps impossible—to change given the private incentives of PBMs, wholesalers, and pharmacies. Bloomberg Business Week offered a thought-provoking article on the challenge of changing the system: The EpiPen Drama Shows What’s Wrong With How Drugs Are Priced. Here’s my $0.02 from the article:


If the system wasn’t built right, why not build a new system? That would involve untangling a web of rebates, reimbursements, pass-throughs, copayments, and fees. “It’s not simple to fix or change this gigantic machine we’ve built,” says Adam Fein, president of Philadelphia-based Pembroke Consulting, which advises drugmakers on sales and distribution.

The EpiPen episode is a small part of the very big problem of high and rising drug prices. But even this small problem is kind of intractable. “Everyone in the system has built their economics and contracts on the list price that exists. It’s incredibly difficult to unwind that structure,” says Pembroke Consulting’s Fein. “I can’t tell you there’s a simple solution. That’s why I’m not a politician.”

I’m not sure where this new dialogue will ultimately lead. But the Mylan episode has started a long-overdue conversation about pricing, rebates, and business models in the drug channel.