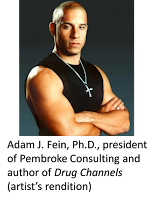 Time for our annual review of the latest Inc. 5000 list, the magazine’s annual ranking of the fastest-growing private companies in the United States. The list offers a valuable snapshot of the dynamic specialty pharmacy industry.

We have identified 12 specialty pharmacies on the 2016 list, which is based upon revenue growth from 2012 to 2015. Annual revenues range from $17 million to $1 billion. The pharmacies and key stats are listed below. Average revenues in 2015 sped ahead by an eye-popping 63%.

Given specialty pharmacies’ growth prospects, there’s a fast and furious market for the buying and selling of specialty pharmacy companies. Two companies below are prime targets. Investment bankers: Start your engines!

P.S. Today's post will help you get tuned up for next week’s National Association of Specialty Pharmacy (NASP) annual meeting. I’ll be there—wearing my black muscle t-shirt, of course!

The 2016 Inc. 5000 list ranks companies based upon percentage revenue growth from 2012 through 2015, shown in the table below. To be ranked, companies must be based in the United States and be privately held, for profit, and independent—not subsidiaries or divisions of other companies—as of December 31, 2015.

Note that companies must apply to be considered for the Inc. list, so some fast-growing, private specialty pharmacies may not appear. Translation: Please do not email me and complain that I omitted your company.

Here are links to our previous analyses of earlier lists:

The Inc. 5000 “health” category includes hundreds of companies. Based upon the magazine’s company descriptions, we identified 12 firms whose primary business is dispensing specialty pharmaceuticals. 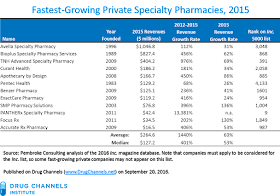 The chart above updates Exhibit 38 (on page 53) of our 2016 Economic Report on Retail, Mail, and Specialty Pharmacies.

Here are three key takeaways from this year’s list:

PANTHERx Specialty Pharmacy, which is new to the list, was ranked #9 out of the 5,000 companies on the overall list. Read its story here: How a Pharmacy Specializing in Rare Disease Drugs Grew 13,380% in 3 Years. An exclusive partnership with Alexion for Strensiq played a big part in PANTHERx’s growth.
Twelve pharmacies from our previous analyses have dropped off the Inc. list.


Diplomat Pharmacy became a public company. Six others were acquired by public companies and are no longer eligible to appear on the list. Five pharmacies either grew too slowly for inclusion or chose not to submit data. For a list of transactions, see Section 3.5. of our 2016 economic report .

Apothecary by Design was acquired by BelHealth Investment Partners, but it is still eligible to be included because it remains a privately held business.
Avella and BioPlus are the next targets.


Two companies—Avella and BioPlus—account for 60% of the total 2015 revenues of the 12 companies on our list. Avella and BioPlus are also the only pharmacies with national market share large enough to appear in our list of The Top 10 Specialty Pharmacies of 2015.

ICYMI, TNH Advanced Specialty Pharmacy--the third-largest business on the list—was acquired earlier this year by Diplomat Pharmacy.
The biggest and fastest growing specialty pharmacies will command significant valuation premiums. Just look at the hefty price that McKesson paid for Biologics. And when the big deal happens, I expect that we’ll hear the owners quote the wisdom of Dominic Toretto. 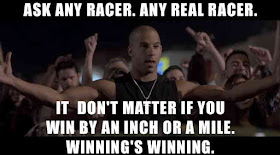