This week, I’m rerunning some popular posts while I attend the 2016 Armada Specialty Pharmacy Summit. Click here to see the original post and comments from January 2016.

Manufacturers pay billions in rebates to pharmacy benefit managers (PBMs). How much of that money do PBMs share with their plan sponsor clients?

According to the PBMI’s survey data, only three-quarters of employers directly receive a piece of manufacturer rebates. Some employers get 100% of the rebates. Others get a portion, sometimes with a guaranteed minimum amount.

Below, I also highlight PBMI data about the prevalence of spread pricing (as opposed to pass-through pricing) as a means for employers to compensate PBMs. Despite what you may have heard, many employers still seem to prefer spread pricing models. Ruh roh!

SCOOBY DATA, WHERE ARE YOU?

The PBMI survey collects data from employers, not PBMs. The 2015-16 edition includes responses from 302 employers that offer prescription drug benefits, accounting for more than 16 million covered lives. The sample population of the PBMI survey is similar to that of the Kaiser/HRET survey that I discuss in Employers Get Tougher About Pharmacy Benefits and Specialty Drug Management. The PBMI research goes much deeper into plan design than the Kaiser/HRET report, but has a much smaller sample size.

Just so you know, I was on the report’s Advisory Board, which meant that I was paid a small fee to review a pre-publication version of the completed research. Final responsibility for the report’s content rests with PBMI.

INSIDE THE MYSTERY MACHINE

Rebates can reduce a third-party payer’s net prescription costs as funds flow through the channel. For manufacturers of brand-name drugs, rebates are typically the biggest factor behind growing gross-to-net disparities. See Drug Prices, Manufacturer Rebates, and the Risk to Channel Economics.

The PBMI survey illustrates the diversity in employers’ rebate agreements with PBMs. The chart below shows our own analysis of the PBMI data. 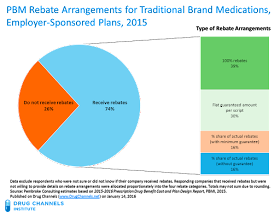 Here are the highlights:
While it’s not stated in the PBMI data, we estimate that on average, PBMs pass back to employers more than 90% of total rebate dollars, regardless of form, received from brand-name pharmaceutical manufacturers. But as the chart above shows, that average may not reflect the experience of any individual payer.

Note that government plans operate differently. Medicaid and the Department of Defense (DOD) are statutorily entitled to certain rebates from drug manufacturers for drugs dispensed to their beneficiaries.

Plan sponsors can use one of two basic pricing approaches to compensate a PBM for plan administration and other services:
Every contract with a PBM is customized to the requirements of the client and could include a mix of spread and pass-through methods. The chart below shows my summary of the primary sources of PBM compensation as reported in the PBMI data. Spread pricing models emphasize retail network spread, dispensing profit, and rebate retention. Pass-through models emphasize administrative fees and service revenues. 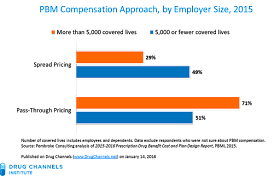 BTW, pharmacy owners seem to believe that they would earn more money if payers switched to pass-through models. I’m not so sure, as I note in my very controversial (and still relevant) 2010 post Why do pharmacy owners care about PBM transparency?

So thanks to those meddling kids at PBMI, you now know more about “The Perplexing PBM Pass-Through Party.” Mystery solved, Scoob!
Adam J. Fein, Ph.D. on Tuesday, May 03, 2016