This week, I’m rerunning some popular posts while I attend the 2016 Armada Specialty Pharmacy Summit. Click here to see the original post and comments from November 2015. 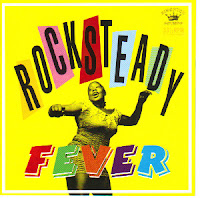 As always, I welcome your constructive and civil comments. Please remember our Drug Channels philosophy, courtesy of the late senator Daniel Patrick Moynihan: "Everyone is entitled to his own opinion, but not his own facts."

The 2015 NCPA Digest, Sponsored by Cardinal Health publishes 2014 financial and operating data submitted by pharmacy owners. It remains the only consistent source of pharmacy owners’ financial data. (Below, I consider the digest’s strengths and weaknesses.)

A PHARMACY PROFIT PRIMER
Here are some basic definitions to clarify the pharmacy profit story.

Gross profit equals a pharmacy’s revenues minus the costs of products (net of discounts and returns) bought from a manufacturer or a wholesaler. Gross margin expresses gross profit as a percentage of revenues.

In a previous report, the NCPA Digest defined the sum of Owner Compensation and Operating Income as Owner's Discretionary Profit (ODP). Thus, ODP represents two of the three ways a pharmacy's gross profit dollars can be spent.

For more on pharmacy and prescription economics, see Chapters 5 and 7 of our Economic Report on Retail, Mail, and Specialty Pharmacies.

For my most recent thoughts on the outlook for independent drugstores, see section 6.1.3. of our new 2015-16 Economic Report on Pharmaceutical Wholesalers and Specialty Distributors.

In 2014, independent pharmacies' overall gross margin from prescription and non-prescription products was 22.9%, a slight drop from the previous year’s result. Even the digest concedes that gross margin “remained relatively stable.” 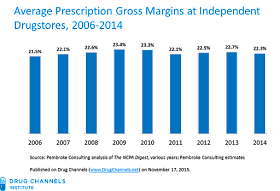 I estimate that about 80% of the prescription revenue decline was due to the lower average prescription prices noted above. In this year’s sample, average annual prescription volume per pharmacy dropped by only 1.4%, to 61,568 prescriptions.

Ongoing brand-to-generic substitution is the most likely explanation for average revenue decline. The NCPA Digest reports that the generic dispensing rate was 80% in 2014. While that figure is two percentage points higher than last year’s figure, it is also below the overall market’s generic dispensing rate.

I estimated that the Owner’s Discretionary Profit (ODP) dropped. On a per-pharmacy basis, this figure shrank, from $247K in 2013 to $228K in 2014. The decrease primarily reflects lower pharmacy revenues in the 2014 sample.

Naturally, NCPA provides no source for these data.

BTW, I consider it a minor personal victory that NCPA has stopped reporting its completely bogus computation of how many pharmacies “operate at a loss.” In previous years, the digest claimed that about one-quarter of pharmacies were operating at a loss. Yet miraculously, the number of pharmacies remained stable! If you understand the three components of gross profit, you'll see why NCPA was eventually shamed into burying the "operating at a loss" data. After all, a net loss may simply mean that the owner drew a salary and bonus that pushed the business’s net profit figure into an accounting loss. Shhh.

For what it’s worth, here are some issues to consider as you evaluate the digest’s data:

This year, I made a good-faith effort to discover the sample size. Alas, NCPA didn't respond to my requests to reveal this apparently top-secret figure. According to the digest: “NCPA has exercised the utmost professional care in compiling the information received.” Apparently, this professionalism doesn’t extend to answering one of the most basic questions about the results. Make of that what you will.
Adam J. Fein, Ph.D. on Thursday, May 05, 2016