Market share for dispensing specialty drugs remains highly concentrated. The top four companies—CVS Health, Express Scripts, Walgreens, and UnitedHealth Group’s OptumRx business—accounted for almost two-thirds of revenues from pharmacy-dispensed specialty drugs. Due to the CVS Health-Omnicare and OptumRx-Catamaran combinations, the top pharmacies’ market share was higher than it was in 2014.

Read on as we cue up our latest update on this booming market.

As I describe in The Top 15 Pharmacies of 2015, many of the largest U.S. pharmacies are now central-fill mail and specialty pharmacies operated by such PBMs and payers.

To complement that broader list, here are the top pharmacies based only on specialty drug dispensing revenues. The table appears in Chapter 3 of my new 2016 Economic Report on Retail, Mail, and Specialty Pharmacies. 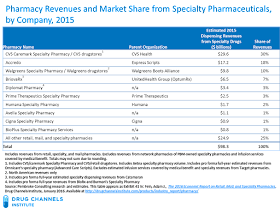 Here are selected highlights of the 2015 market share figures:
Two other independent specialty pharmacies—Avella and BioPlus—made the top 10. In case you’re wondering, we had estimated Biologics, which was just acquired by McKesson, to have been the 11th largest specialty pharmacy in 2015.

Revenue growth in the “All other retail, mail, and specialty pharmacies” category demonstrates that many pharmacies are now competing to dispense these expensive therapies. As I discuss in Chapter 3 of my report, the specialty market’s growth continues to draw many companies into the business of dispensing specialty drugs. We estimate that the “all other” category, however, had a market share slightly lower than our 2014 estimates. Payers and manufacturers are exerting more control over specialty drug channels, so you can understand why smaller pharmacies may feel a bit snookered.

Given the industry’s growth prospects, there are many specialty pharmacy companies on the table for acquisition. Plus, four of the largest U.S. health insurers have proposed merging into two companies. While I expect our top 10 list to keep evolving, it’s too soon to call the pocket where these companies will land.