Another day, another channel consolidation play!

PSAOs are crucial but little-known intermediaries that operate between pharmacies and pharmacy benefit managers (PBMs) in our complex U.S. drug channel system. Arete Pharmacy Network is now the fourth-largest PSAO, just behind the PSAOs operated by the Big Three wholesalers. See below for our list of the top 11 PSAOs.

Our research on industry consolidation has highlighted the three key options for smaller players: Get Big, Get Focused, or Get Out. Expect this unexpected deal to trigger even more novel combinations. Read on what comes next.

PSAO: THE BUSINESS BEHIND THE ABBREVIATION

Large pharmacies interact and negotiate directly with PBMs. Nearly all smaller pharmacy owners, however, participate in a PSAO to leverage their influence in contract negotiations with PBMs and other third-party payers.

A PSAO gives a group of independent pharmacies access to managed care and PBM contracting advantages that are normally associated with large, multi-location chains. Section 5.4.3. of my new 2016 Economic Report on Retail, Mail, and Specialty Pharmacies reviews the key benefits that PSAOs provide. These benefits include pooled contractual negotiating power, centralized claims payment, and reconciliation of prescription payment activity.

The chart below presents our latest list of the top PSAOs. 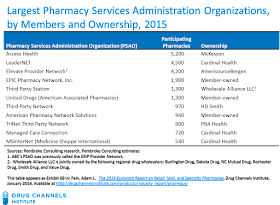 The biggest PSAOs are operated by the biggest wholesalers, thereby providing a negotiating advantage for smaller drugstores. The wholesalers operate PSAOs as a service for their smaller pharmacy customers. We estimate that over the past few years, the PSAOs operated by McKesson and Cardinal Health have gained members. AmerisourceBergen’s PSAO, which recently changed its name to the Elevate Provider Network, has shrunk.

GET BIG, GET FOCUSED, OR GET OUT

Almost 20 years ago, I coined a simple phrase to describe the strategic options available in industries that are consolidating: Get Big, Get Focused, or Get Out.

Put simply, this means that if a small pharmacy wants to win in today’s consolidating drug channel, it needs scale or differentiation. Otherwise, cash out gracefully. (In case you’re curious, I first used the phrase in a 1997 article that subsequently became the basis of a book published in 2000.)

PSAOs let pharmacy owners appear bigger without giving up control of their businesses. I view PSAOs as a key reason why pharmacist-owned independents remain an important industry segment. For example:
Unfortunately for pharmacy industry lobbyists, the presence of big PSAOs undermines their arguments about lopsided negotiations between giant PBMs and small pharmacies.

As in any other alliance, PSAOs have their own set of risks and rewards. The multitude of stakeholders–other owners, wholesalers, and the PSAO itself–creates the possibility that effective strategic planning processes can be hijacked by organizational politics and differing objectives. Oh well. Life is full of tradeoffs.

The fragmented PSAO sector is long overdue for consolidation. Payers want to build networks with broad access and a national footprint. Expect this deal to trigger more second-tier PSAOs to combine.

Which of the following inspired the name “Arete?”

A) Queen Arete, a descendant of Poseidon
B) Princess Arete, a Japanese anime movie from 2001
C) 197 Arete, the asteroid discovered by J. Palisa on May 21, 1879
D) Arête, a thin ridge of rock formed by glaciers

Answer: None of the above.

Here’s what Rob McMahan, president of United Drugs, told me:


”Arete is a Greek word that means virtue or excellence. We chose it because it represents the excellence that we expect to have in a quality network.”