For the first time, the Express Scripts data account for rebates—a meaningful and welcome improvement in reporting methodology. After accounting for rebates, the 2015 report reveals that drug spending growth is comparable to growth in other parts of the healthcare system. For some payers, utilization (script growth) was a bigger driver of spending than drug prices.

So much for the myth of exploding drug costs! Our politicians may not believe it, but Martin Shkreli et al. are the exception in the pharmaceutical industry. Below, I review the four key highlights about traditional and specialty drug spending, trend patterns for different payers, and a red flag from upcoming biosimilar launches.

Plus, diving into the numbers is more fun than contemplating the Anthem-Express Scripts kerfuffle and the meaning of such ill-defined terms as "competitive benchmark pricing."

Year-over-year changes in payers’ drug spending have two primary components:
The inclusion of rebates does not mean that every rebate dollar is directly reflects in unit costs. Some payers get 100% pass-through of the rebates provided by manufacturers to PBMs. Others get none or a portion of these rebates. For employers without 100% pass-through, the discounts provided by rebates are presumably factored into the prices charged by the PBM. For more on this topic, see Solving the Mystery of Employer-PBM Rebate Pass-Through.

Regardless of how you feel about Express Scripts as a business partner or company, we should all appreciate how much pharmacy benefit data is included in its annual report.

Express Scripts presents data for the four major payer types: Commercial; Medicare; Medicaid; and Health Insurance Marketplace Plans, a.k.a., Exchanges. These payers account for nearly all U.S. outpatient, pharmacy benefit spending, per my analysis of government data in Five Fun Facts: The Newest Prescription Drug Spending and Payer Data. The report’s 130-plus pages also include detailed data on the top traditional and specialty therapeutic categories, along with details for different types of Medicare, Medicaid, and Exchange plans. For clarity, I present only the aggregated figures in the charts below.

For contrast, consider CVS Health’s 2015 trend “report,” which is little more than a four-page promotional pamphlet. CVS Health told me: “Based on client feedback, yes, we are moving away from longer-form content.” Clients are requesting less information?!? Whatever.

Here's our summary of trend for traditional (non-specialty) drugs, by payer: 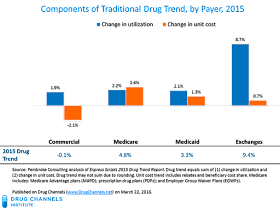 Here’s our summary for specialty drugs: 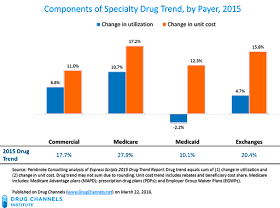 1) Commercial payers were better able to control costs. As we all know, PBMs force manufacturers of therapeutically comparable brand-name drugs to compete for placement on the plan sponsor’s formulary—or even to avoid being cut from the formulary. The Express Scripts data show that commercial plans were better able to undertake benefit design strategies that drive bigger rebates, including formulary exclusion and generic substitution. See my comments on gross-to-net discounts in Drug Prices, Manufacturer Rebates, and the Risk to Channel Economics.

Express Scripts highlighted the fact that payers with “tightly managed” plans had total drug trend of 3.3%—and that 30% of its commercial plan sponsor clients had drug trend that was flat or negative. Compared with other payers, commercial plans tend to have younger and/or healthier beneficiaries. That also makes benefit management easier for a PBM.

2) More people are getting access, which is “good” spending. The Express Scripts data also clearly show that a big chunk of spending growth can be attributed to the growth in the number of people being treated and the number of prescriptions being dispensed. That’s a positive trend that we should all welcome, because it is well established that pharmaceutical spending reduces medical spending.

Consider the 8.7% utilization increase for traditional drugs in exchange plans, which was the major factor behind the 9.4% spending increase. Specialty drugs coverage by Medicaid was a notable exception to the utilization trend. Medicaid clamped down on drugs for HIV (utilization down -5.9%) and hepatitis C (-39.9%). How can Medicaid's actions be considered good and noble? 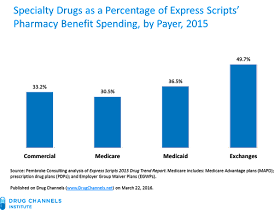 4) Hunker down for the biosimilar formulary wars. The unit cost increases for specialty drugs should be a warning sign for manufacturers, which will face increasingly aggressive payers and PBMs. As I discuss in Here Come the 2016 PBM Formulary Exclusion Lists, payers and PBMs are becoming more willing to exclude specialty products from standard formularies.

When pharmacy benefit biosimilar alternatives start launching, I expect them to be marketed as brand alternatives rather than as interchangeable generics. Consequently, PBM formularies will become crucial for marketing success. Here's what Dr. Glen Stettin from Express Scripts told me during our conversation about the new drug trend report:


“If we are not able to drive discounts and rebates from brand manufacturers, then we are highly confident that we will be able to move significant market share to biosimilars.”

In other words, the PBMs are hoping to do to specialty drug pricing what they did to hepatitis C drug pricing.  Brace yourself.