Cardinal Health just acquired RainTree Oncology Services, the largest independent group purchasing organization (GPO) for community oncology practices and clinics. Cardinal did not issue a press release because it was a small tuck-in acquisition. So, today's article counts as another Drug Channels exclusive.

The acquisition is another good move for Cardinal and its growing specialty distribution business. Since RainTree is a major player in oral oncology, the deal also features some of the same strategic motivations as McKesson’s acquisition of Biologics.

Read on to learn more about physician practice GPOs and Raintree’s tangled history with Express Scripts and AmerisourceBergen. 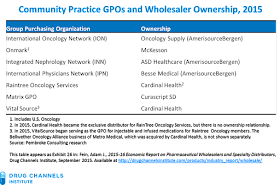 For example, ION is the largest community oncology GPO, with an estimated 4,800 oncologists in 1,600 practices. ION has a prime vendor distribution arrangement with Oncology Supply. Both organizations are part of AmerisourceBergen’s Specialty Group, which operates two other GPOS that have similar affiliations.

These GPOs create strong physician practice incentives for purchasing via a distributor instead of directly from a manufacturer. They also help specialty distributors secure their role in the drug distribution system.

RainTree's strength in oral oncology is the real prize. As I discuss in Inside McKesson’s Acquisition of Biologics Specialty Pharmacy, oncology practices now operate significant specialty pharmacies for dispensing of patient-administered oral oncology products and patient self-injectable drugs. The deal also prevents RainTree from being acquired by a competitor.