Is the generic drug inflation story over?

The Food and Drug Administration (FDA) is finally starting to clear the backlog of new generic drug applications. And right on cue, wholesaler executives have confirmed that generic inflation is slowing down or ending, reducing their profits.

As I told NPR’s Marketplace radio show: “The real solution is the solution that always works, which is introduce more competition in the market.” The lesson: Every so often, economics gets it right.


“High prices for a particular product should encourage new suppliers, thereby lowering prices. Unfortunately, new generic drug approvals are still backlogged at the Food and Drug Administration (FDA)….In a keynote address at this year’s Generic Pharmaceutical Association (GPhA) annual meeting, the Director of the FDA’s Office of Generic Drugs, Kathleen Uhl, promised faster action. If she makes good on this promise, then competition will drive down generic prices within 12 to 18 months. Let's see if the FDA can act.”

Last week, Dr. Janet Woodcock, Director of the FDA’s Center for Drug Evaluation and Research, testified about generic drug approvals. (Click here to read her testimony.) The chart below, which appears on page 7 of her testimony, highlights the FDA’s progress in clearing its backlog of abbreviated new drug application (ANDAs). 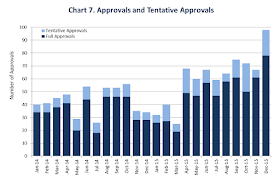 Dr. Woodcock’s testimony explained how FDA accelerated approvals, including hiring more than 1,000 new employees. Her testimony also suggested that the approval backlog will not soon return. As she shows on page 11 of her testimony, the filing backlog—which measures the FDA’s initial review to determine if an application is sufficiently complete to merit the FDA’s substantive review—has effectively vanished, from more than 1,100 applications to 2 applications.

FYI, I discuss the impact of generic price inflation on pharmacy profits in section 10.3.3. of my new 2016 Economic Report on Retail, Mail, and Specialty Pharmacies.

WHOLESALERS CONFIRM THE MAGIC OF MARKETS

Lo and behold, the FDA’s actions had a predictable effect: The unprecedented generic inflation of 2013-2014 is fading.

Wholesalers had been profiting from generic price increases, which can typically be passed directly to their pharmacy customers. As long as a wholesaler’s gross margin percentage remained stable, gross profit dollars increased along with generic drug costs. Wholesalers also earned higher gross profits on products purchased before generic inflation began.

As I predicted in The 2015-16 Economic Report on Pharmaceutical Wholesalers and Specialty Distributors, wholesalers’ profits from generic drugs will slow as generic deflation reemerges without new generic launches. Comments over the past few weeks on wholesaler earnings calls highlight this expected reversal.

At January’s J.P. Morgan conference, McKesson kicked off wholesalers’ public statements about generic inflation. Its 2017 earnings guidance highlighted the company’s expectation that “operating profit derived as a result of generic pharmaceutical pricing trends will be weaker in the second half of the fiscal year compared to previous expectations.” McKesson also presented the following chart, which inexplicably omitted axis scale numbers. Note that McKesson’s fiscal years end on March 30. 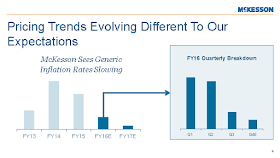 On McKesson’s January 28 earnings call, CEO John Hammergren noted that the inflation benefit was driven by a few products: