As low-cost generics come to dominate retail dispensing activity, clinics have emerged as a way for drugstores and other retail pharmacy outlets to diversify into non-dispensing revenues.

There are now about 2,000 retail clinics. Below, I examine the chains with the biggest market share: CVS Health, HEB, Kroger, Rite Aid, Target, Walgreens, and Walmart.

In 2015, the number of clinics grew slowly. In 2016, I project another year of slow growth as the big players retrench. While clinics sound like an exciting strategy, revenues from in-store clinics are—and will likely remain—a very small share of pharmacy chains’ prescription revenues.

The table below summarizes our analysis of the current landscape for the biggest market participants. The data come from Merchant Medicine, which has a very impressive database of every U.S. clinic location. 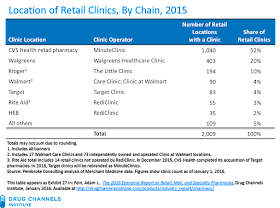 Here’s a look at the strategies and growth plans of the large retail chains:


As I discuss in Section 2.4.1. of the new 2016 Economic Report on Retail, Mail, and Specialty Pharmacies, many factors support continued retail clinic growth. While 2016 may see little growth, I still expect the number of retail clinics to reach 2,300 to 2,500 locations by 2018.

That said, don't forget that a good forecaster is not necessarily smarter than everyone else. He merely has his ignorance better organized.