According to new data that Apexus has made available to Drug Channels, discounted purchases made under the 340B Drug Pricing Program hit $12 billion in 2015. That’s a whopping 67% higher than the 2013 figure. I estimate that the undiscounted value of these purchases exceeds $17 billion.

Most 340B purchases are made by hospitals. My exclusive number-crunching below reveals that hospitals now receive 340B discounts on more than 44% of their drug purchases. As I predicted two years ago, the 340B program is taking over the hospital market.

How much of this money goes to uninsured and needy patients? No one knows, and the hospitals aren’t saying much. The Health Resources and Services Administration (HRSA) expects to finalize its Omnibus Guidance in the fall. Unfortunately, HRSA doesn’t seem keen on requiring that any financial savings be directed to the neediest patients. Maybe it just doesn’t want to get a blister on its little finger.

THAT'S THE WAY YOU DO IT

As I explain in the notes below, these figures likely understate total 340B purchases, because of data collection limitations. Also keep in mind that these data represent purchases at or below the deeply-discounted 340B ceiling prices. 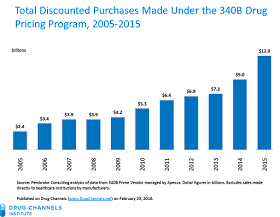 Consequently, 340B has infiltrated almost half of the hospital market. In 2015, the 340B share had risen to more than 44% of purchases. (See chart below.) The actual percentage is likely higher, because direct sales are not included in the Apexus 340B totals. 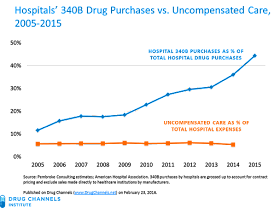 The 340B program is highly controversial, partly because the 340B legislation does not specify or restrict how covered entities should utilize funds generated by the program. Hence, it’s troubling to see that uncompensated care as a percentage of hospitals’ total expenses has remained at about 6% for many years, despite booming 340B purchases.

Defenders of the 340B status quo argue that covered entities should be able to use discounts to reduce their cost of operations, without any transparency or accountability. They frequently claim that 340B spending amounts to “only 2%” of U.S. drug purchases. But the hospital data show that the 2% figure is just misleading propaganda. Given the program’s skyrocketing growth, this bogus stat also needs to be updated to “almost 5%.”

GET YOUR MONEY FOR NOTHIN'

Government oversight and advisory agencies are the 340B program's biggest critics, saying “That ain't workin' .” A few examples:
And of course, we also have an entertaining stream of ironic news. My recent favorite was the revelation that the CEO of the 340B-eligible Carolinas Healthcare (DSH340001) made $6.6 million in 2015. (source). Each of the hospital’s top 10 executives made more than $1 million. You may recall that Carolinas Healthcare also negotiates 300% markups on cancer drugs. (source)

Put another way, hospitals’ profits from outpatient drugs are certainly not in … dire straits. (ouch.)

As I noted last December, HRSA’s recent Omnibus Guidance didn’t bother to require that hospitals explicitly use 340B discounts to help vulnerable and underserved patients. That said, I should note that the guidance also omitted any mention of chicks and MTV.

Notes for nerds:
CHANNELS IN ARMS


The following video is brought to you by 1980s Adam. Click here if you can’t see it.