On the plus side, due to data revisions, 2014 drug spending was $7.4 billion less than CMS had projected back in July.

Read on for my detailed look at trends in who really pays for our country's prescriptions drugs.

WHO PAID FOR OUR DRUGS?

The chart below shows the payment sources for outpatient prescription drugs (share of dollars) in 2014, the most recent available data. This year, CMS released some new underlying data, so I’m able to present more precise groupings than I’ve used in my previous analyses. 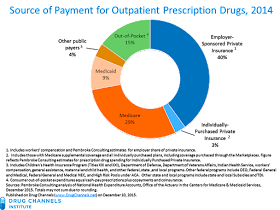 The next chart shows the year-over-year growth rates in expenditures, by payer. These expenditure data are net of manufacturer rebates. The reported growth rates, therefore, could differ from changes in pharmacies’ prescription revenues and manufacturers’ gross revenues. For more on the difference between gross and net sales, see Drug Prices, Manufacturer Rebates, and the Risk to Channel Economics. 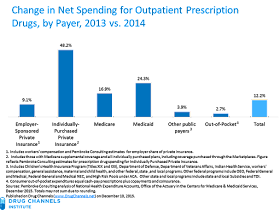 Note that the $297.7 billion figure does not measure total U.S. spending on prescription drugs. Inpatient prescription drug spending and nearly all provider-administered outpatient drugs are reported in other categories. For example, some portion of the NHE "Hospital Care" category includes an unknown (but small) amount of drug spending. This additional spending accounts for an additional three to four percent of national health expenditures.

Another reminder: The National Health Expenditure data are not equivalent to the data on "non-discounted spending" that IMS Health reports from its National Sales Perspectives data. Many commentators and industry publications mistakenly refer to the IMS figures as "sales" or spending. However, the IMS Health data measure purchases by pharmacies at invoice prices. By contrast, the NHE data measures net spending by payers, which is roughly equivalent to pharmacy revenues (purchases plus pharmacies' margins) minus third-party payer rebates.

1. Spending on outpatient prescription drugs grew much more quickly than did overall national health expenditures. In 2014, prescription drug spending grew by 12.2%, which is more than twice the 5.3% growth in overall expenditures. This marks the first time since 2009 that growth in drug spending exceeded growth in national healthcare spending. CMS notes three key factors behind the 2014 figures: (1) increased spending on new medicines, particularly for specialty drugs that treat hepatitis C, (2) fewer patent expirations and fewer new generic drugs compared with those of recent years, and (3) price increases for brand-name drugs.

Medicaid prescription drug spending accelerated, from 4.2% in 2013 to 24.3% in 2014. For the past few years, healthcare reform reduced Medicaid’s net spending on drugs, because the Affordable Care Act (ACA) increased manufacturers’ unit rebate amount and also extended rebates to Medicaid managed care plans. Those changes are now reflected in the baseline figures, so the 2014 growth reflects coverage expansion and increased utilization. CMS expects Medicaid drug spending to grow by 13% in 2015, but then slow to about 6% annually through 2024.

4. The individual insurance market is booming. For the first time, CMS provided additional spending details for people with directly purchased private insurance. I refer to these policies as “Individually-Purchased Private Insurance.” These include those with Medigap Medicare supplemental coverage and all individually purchased plans, including coverage purchased through the Marketplaces. In 2014, the biggest growth came from marketplace plans, which now account for one-third of Individually-Purchased Private Insurance. Prior to 2014, marketplace plans had little impact on spending. The figures in the chart reflect our estimates for prescription drug spending for these plans.

5. Consumers’ share dropped again. In 2014, consumers’ out-of-pocket expenses—cash-pay prescriptions plus copayments and coinsurance—grew by $1.2 billion, from $43.5 billion in 2013 to $44.7 billion in 2014. However, consumers’ share of outpatient prescription drug expenditures expenses shrank, from 16.4% in 2013 to a historically low 15.0% in 2014. The consumer’s share is predicted to keep dropping, as I explain in Here’s Who Will Pay For Prescription Drugs in 2024.

Alas, we didn’t really save any money. Every five years, the U.S. National Health Expenditure Accounts (NHEA) undergoes a comprehensive revision that includes the incorporation of newly available source data, methodological and definitional changes, and benchmark estimates from the U.S. Census Bureau’s quinquennial Economic Census. The prescription drug data were revised to incorporate data from the 2012 Census of Retail Trade. Click here for the wonktastic details.
Adam J. Fein, Ph.D. on Thursday, December 10, 2015