Late last week, Walgreens Boots Alliance (WBA) filed an 8-K with the full text of its merger agreement with Rite Aid. Click here to read it.

The document containing the Agreement and Plan of Merger weighs in at a hefty 137 pages. Below, I highlight four fun facts about the deal’s timing, its termination fees, and what the companies will do to achieve antitrust approval.

WBA also released a new slide deck summarizing a bit more about its strategic rationale for the deal. Excerpt below.

For background on the merger, please see our Walgreens-Rite Aid Deal: Ten Things You Should Know. But you've already read that article, right?

NOT FRIGHTENED BY THE SOUND OF RELATIONSHIPS

On last week's call, the WBA were sketchy about the Rite Aid transaction. In a new slide deck (available here), WBA provides a smidgen more about its rationale for the deal. 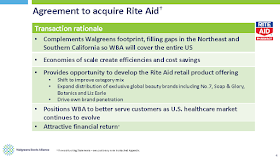 Here are four items that caught my eye.

1) The deal must be completed before Halloween 2016.


According to section 8.1(c) of the agreement, the companies must finish the transaction by October 27, 2016. If certain specified circumstances arise, the deadline can be extended to January 27, 2017.

2) If Rite Aid backs out of the deal, then it owes as much as $370 million to Walgreens Boots Alliance.


Per section 8.2(b)(i), Rite Aid will owe a $325 million termination fee to WBA if Rite Aid’s board votes against the deal or if Rite Aid finds another buyer.

And per section 8.2(b)(iii), Rite Aid will also owe $45 million for “all of the documented out-of-pocket expenses” incurred by WBA in connection with or related to the “authorization, preparation, negotiation, execution and performance of this Agreement and the transactions contemplated by this Agreement.” Makes sense. After all, investment bankers don't eat at Shake Shack.

3) WBA could owe Rite Aid a termination fee as large as $650 million.


Per section 8.2.(b)(iv), if Walgreens Boots Alliance can’t get approval under antitrust law, then it must pay Rite Aid a $325 million termination fee.

If WBA enters into another agreement that prevents it from completing the Rite Aid deal, the termination fee increases to $650 million. I suppose this covers the contingency of an Express Scripts deal.


To get antitrust approval, WBA would be willing to reduce total store count by as many as 1,000 locations, or about 8% of the combined total 12,700 retail locations. Section 6.4.(d) outlines that the reduction could be achieved by sale, transfer, disposal, divestiture, or holding the stores separately. In its new slide deck, WBA stated that it "believes the most likely outcome is divestments of less than half this number."

Who will buy those stores? In this Bloomberg Business article, some antitrust lawyers argue that WBA will have to sell the stores to a national player. But I see many more options, including regional chains and wholesaler groups. It may also be possible for other pharmacies to satisfy regulators by buying local prescription records, a.k.a., a "file buy." This will be a key issue in a Federal Trade Commission (FTC) evaluation.

When discussing antitrust approval issues last week, WBA CEO Stefano Pessina was evasive and vague. After reading the agreement, I find his comments to be very odd, given that the details had already been negotiated and agreed upon.

Now you don't have to make an effort now to find out where the money goes. More news to come as this merger proceeds. In the meantime, enjoy this brief video of how I spent my weekend. Click here if you can’t see the video.