Today, I examine retail chains in the biggest Part D networks. Walmart and Walgreens lead the pack in preferred network participation. CVS remains conservative, while Rite Aid has opted out. In most plans, independents feature prominently as preferred pharmacy options.

Preferred networks are crucial for understanding drug channel economics. Pharmacies compete to be in these networks, so the cost savings come from lower pharmacy profits. And Medicare Part D accounts for more than one-quarter of the outpatient prescription market. Read on for our exclusive, Evil Dead inspired look at 2016’s preferred network participants.

Some plans make it easy to figure out which retail chains are preferred pharmacies. Examples:
By contrast, other plans force beneficiaries to use a pharmacy locator. These online tools, which may seem to be designed by primitive screwheads, require a beneficiary to enter a zip code and manually scan through a list of pharmacies, some of which are flagged as “preferred.”

Oddly, the Magellan Rx Medicare Basic PDP provided no online information. When we called, a representative said: “You have to be a member to get into the site.” (The rep didn’t chuckle when I asked if I also had to recite the words “Klaatu Barada Nikto.”) The table below reflects what the call center rep told us.

Based on our research, I developed the table below, which summarizes the large retail chains’ and independents' participation as preferred pharmacies. Click here to download the table as a PDF file. 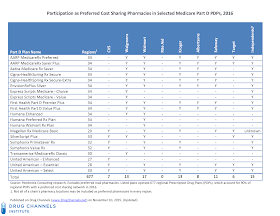 If a chain participates as a preferred pharmacy, all of its brands usually participate, too. Thus, Walmart includes Walmart, Sam's Club, Neighborhood Market pharmacies, and Walmart Express. However, not all of a chain’s pharmacy locations are necessarily included as preferred pharmacies in every region.

CVS remains conservative. CVS retail pharmacies are preferred in only seven major plans. These plans include its own United American and SilverScript options. Unlike last year, CVS is not preferred in the networks operated by its business partner Aetna.

Walgreens still likes being preferred. During its April analyst day, Walgreens highlighted the profit pressures from preferred networks. (See Walgreens Boots Alliance: Analysis of its New U.S. Pharmacy Strategy.) I guess that analysis wasn’t scary enough. In 2016, Walgreens will be preferred in 13 plans. Just maybe they can protect their profits. Yeah, and maybe I'm a Chinese jet pilot.

Walmart: Hail to the King. No other retailer has done more to compete on price than Walmart, which is a preferred pharmacy in 17 of the 21 major preferred cost sharing networks. It is excluded only from the two Express Scripts plans, one of the United American plans, and the Transamerica plan.

Supermarkets stay in the game. Kroger, Albertsons, and Safeway are also active participants in preferred networks. I guess they weren't frightened when payers revealed the DIR fees and said: "This is my BOOM stick!"

Rite Aid opts out. According to our research, Rite Aid is not participating as a preferred pharmacy with any of the plans shown in the table. Hello, Mr. Fancypants!

Independents make another strong showing. Smaller pharmacies are well represented in 2016 preferred networks. Some plans even identified the pharmacy services administrative organizations (PSAOs) in their networks. Aetna Medicare, for instance, tells beneficiaries to ask their local pharmacy with such networks as Access Health, Cardinal MCC, and Third Party Network. (If you’re not familiar with these PSAOs, see section 2.2.2. in our new 2015-16 Economic Report on Pharmaceutical Wholesalers and Specialty Distributors.) I’m sure many pharmacy owners believe that participation is akin to cutting off their right hand with a chainsaw. But it’s surely better than being excluded.

Mergers: Who wants some? The 2016 plans do not reflect this year’s mergers. Thus, there are differences in network participation between: (1) CVS and Target, (2) Albertsons and Safeway, and (3) Walgreens and Rite Aid.