EXCLUSIVE: In 2016, 85% of Medicare Part D plans have a preferred pharmacy network 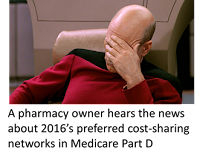 The Centers for Medicaid & Medicare Services (CMS) just released data on 2016's Medicare Part D plans. Our exclusive, warp speed analysis reveals that 85% of Medicare Part D regional prescription drug plans (PDP) will have a preferred cost sharing network in 2016. That’s comparable to the 2015 figures, and signals that these plans are here to stay.

Preferred network plans are controversial (and generally disliked) by pharmacy owners. That’s because reduced pharmacy profits are the biggest source of cost savings from these networks. Despite ongoing complaints, it's still full speed ahead for preferred networks.

Read on for a look at the top plans. I'll review pharmacy network participation in a future article.

To identify 2016’s Part D preferred cost-sharing pharmacy networks, I used the 2016 Drug and Health Plan Data and the 2016 PDP Landscape Source Files (v 09 15 15). My analysis includes only stand-alone PDPs. I eliminated these plans from the sample:
I included 139 plans that are under sanction as of September 9, 2015. CMS provides information for these plans, but they can’t accept new enrollees. All of the sanctioned plans are offered by United American Insurance Company or First United American Life Insurance Company.

For last year’s analysis, see For 2015, almost 9 out of 10 Medicare Part D plans will have a preferred pharmacy network. For the economics of narrow network models (including DIR fees), see section 8.3 of our 2014-15 Economic Report on Retail, Mail, and Specialty Pharmacies.

In 2016, there will be 62 plans with preferred networks, down from 66 plans in 2015. These plans operate 754 regional PDPs and account for 85% of the total regional PDPs for 2016. (Note that a few plans don’t have preferred cost sharing in every region.)

Here is a summary of the major companies offering PDPs, along with the split of preferred cost sharing vs. open pharmacy networks. 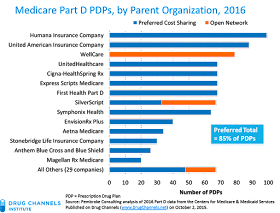 2016 highlights from the top companies:
Per CMS to Part D Preferred Pharmacy Networks: We’ll Be Watching You, CMS will be scrutinizing how plans market these narrow networks. But as pharmacy competition rises, don’t forget the words of a certainly follicly challenged starship captain: “It is possible to commit no mistakes and still lose. That is not a weakness; that is life.”
Adam J. Fein, Ph.D. on Friday, October 02, 2015