Employers Get Tougher About Pharmacy Benefits and Specialty Drug Management 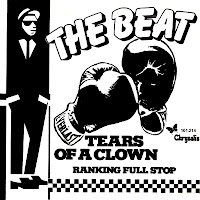 It’s time for our annual review of the Kaiser/HRET 2015 Employer Health Benefits Survey, which you can read online for free. The survey delves into employer-sponsored health coverage at 2,000 companies.

Bottom line: Employers didn’t make major changes this year, but they continue to shift prescription drug costs to beneficiaries and are focusing on specialty drug management. As I explain below, the plan details won’t give employees a glad expression.

The 2015 report tracks health benefits at 1,997 firms, 89% of which offer health benefits to employees. Nearly all (99%) covered workers in these plans have a prescription drug benefit.

The survey’s sampling methodology is solid. (Click here for the wonktatsic methodology.) Drug Channels readers will be most interested in the survey data on Prescription Drug Benefits (section 9). Unfortunately, the report does little to break-out pharmacy benefit results by employer size, industry type, and other categories.

The Kaiser team told me that they were too busy to release a PDF of the whole report, so you’ll have to wade through a complex series of web pages to read the full results. But it's worth doing, so don't let my brief lesson give you the wrong impression.

A pharmacy benefit covers outpatient prescriptions dispensed by a licensed pharmacy. For consumers with third-party pharmacy benefit insurance, the share of the prescription’s cost is usually linked to benefit cost tiers—categories that define the plan member’s copayment or coinsurance. In general, prescription drug plans financially reward patients for using generic and lower-tier drugs. The plans do this by requiring the patient to pay progressively higher copayments or coinsurance for drugs on higher tiers. For more background on pharmacy benefits, see Chapter 4 of our 2014-15 Economic Report on Retail, Mail, and Specialty Pharmacies.

Here is how the Kaiser/HRET survey defines the most common drug tiers:

In 2015, the three-tier design—generic drugs, preferred brand-name drugs, and non-preferred brand-name drugs—remains the most common, used in 65% of employer-sponsored plans. (See chart below.) Plans with four of more tiers have grown substantially. They accounted for 3% of employer-sponsored plans in 2004 to 23% in 2015. Compared with last year’s report, there was a small but statistically insignificant increase in four-tier plans: from 20% of covered workers in 2014 to 23% in 2015. 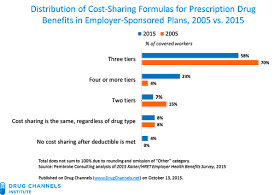 In the overall sample, a small percentage of plans have the same cost sharing regardless of drug type (8%). This result comes from the inclusion of employees in High-Deductible Health Plans with a Savings Option (HDHP/SOs), which have different cost-sharing patterns for prescription drugs than do other plan types. 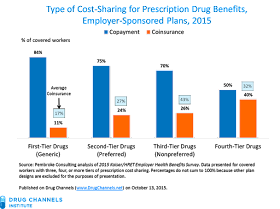 Coinsurance rates for fourth-tier drugs, which tend to be specialty products, averages 32%. This means that a patient would pay about $900 for an average specialty prescription of about $3,000. Most covered workers are in a plan that partially or completely limits out-of-pocket maximums.

Such coinsurance designs are becoming distressingly common. For example, plans on the ACA insurance marketplaces also have high coinsurance for specialty drugs. The AIDS Institute has just published an analysis of the Florida plans. It found that many insurers placed hepatitis drugs on the fourth and fifth tiers and had coinsurance rates as high as 50%. Check out its report here.

For the first time, the Kaiser/HRET survey asked employers about the strategies they use to manage specialty drug costs. As you can see in the chart below, large companies are much more likely to use these benefit management tools than are smaller companies. Surprisingly, the reported usage of such tools as utilization management and step therapies is lower than the usage reported in other surveys. 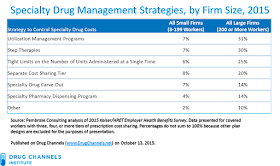 QUITE A DIFFERENT SUBJECT

Here’s a prescient video from the great English Beat, who sing about the emergence of managed care and pharmacy benefits. Fun fact: When this cover of the Smokey Robinson & The Miracles classic was released, in 1980, consumer out-of-pocket funds—the sum of cash-paid prescriptions and consumer copayments—accounted for more than 70% of U.S. prescription drug costs. The consumer’s share was only 16% in 2014. That's quite a different subject.