Catching Up With Cardinal Health China

Pharma distribution nerds, rejoice! Cardinal Health has just released its 10-K annual report for its 2015 fiscal year, which ended on June 30. Unfortunately, Cardinal continues to reduce the amount of information it discloses to investors and others. This year, working capital stats and associated chargeback adjustments have mysteriously vanished from Cardinal's SEC reports and earnings presentations. (When I asked, Cardinal would only say that "it's not a required disclosure." Hmmm...)

Despite the troubling opacity, let's review Cardinal’s China position. As the chart below shows, FY15 revenues at Cardinal Health China were $3.0 billion and accounted for 3% of the company’s total corporate revenues. I include a recent interview with CEO George Barrett, who provides useful insights into China’s political and economic climate.

P.S. Our updated 2015-16 Economic Report on Pharmaceutical Wholesalers and Specialty Distributors will be released in early October. In the meantime, the 2014-15 edition is on sale until September 9.

In 2010, Cardinal became the first major U.S. wholesaler to invest in the Chinese drug distribution market with its acquisition of the privately held Zuellig Pharma China, known in that country as Yong Yu. (Read my 2010 Drug Channels post about the deal.) At the time of the acquisition, Yong Yu was the ninth-largest wholesaler in the splintered Chinese market. It was more advanced, however, than the average Chinese distributor, due to its history as a subsidiary of Swiss-based Zuellig Pharma.

Cardinal has since acquired at least 12 other Chinese distributors and rebranded the whole business Cardinal Health China.

Cardinal Health China’s annual revenues were $3.0 billion in its 2015 fiscal year, up an estimated 22% from 2013. (See chart below.) The company has 13 distribution centers in 11 Chinese cities. In addition to wholesaling and other channel services, its China business includes about 30 direct-to-patient pharmacies focused on dispensing specialty drugs. Cardinal also operates a third-party logistics business for medical devices. 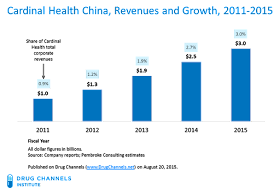 Cardinal Health CEO George Barrett recently sat down with Fortune magazine and talked about the Chinese market. The video is well worth a few minutes of your time. Click here if you can’t see it.