I’m taking a break from blogging this week and rerunning some popular posts from early 2015. Click here to see the original post and comments from April 2015 Today's rerun is a good primer for WBA's earnings call tomorrow..

WBA is a complex, global business with three major divisions and annual revenues of nearly $125 billion. Hence, the analyst “day” was a 2-day, 12 hour affair in which management presented 282 slides and generated a 125 page transcript!

Never fear, Drug Channels reader. I scoured every ounce of this material to find you the most valuable kernels. Below, I highlight my observations about WBA’s Retail Pharmacy USA division, a.k.a. Walgreens. My themes include the U.S. businesses’ changing focus, hypercompetition in the pharmacy industry, payer relationships, specialty pharmacy strategy, previous management’s missteps, and more. Read on for the sweet and salty details.

The Retail Pharmacy USA discussion was led by Alex Gourlay, a long-time Boots executive who is now the president of Walgreens, and Jeff Berkowitz, who has moved from Walgreens Boots Alliance Development (WBAD) to become president of Pharma and Global Market Access.

As always, I encourage you to read the original source material for yourself. Here are direct links to their presentation materials :
For a brief history of how WBA came to be, see my post from last December: Walgreens Loses Its CEO: How Did We Get Here? What’s Next?

Gourlay’s guiding principle is for Walgreens to be “America's most-loved pharmacy-led health, well-being, and beauty retailer.” By using the term “pharmacy-led,” Gourlay is signaling that Walgreens wants to be a great retailer first and a chain drugstore second.

He also highlighted the company’s focus on “Look Good, Feel Good” consumers, who he said have a “great interest in health and beauty care.” During the Q&A, Gourlay discussed the Boots European retail model, saying that “…the real secret of this model is the connectivity between health and beauty, between pharmacy and the front end, and really the customer experience along with the products you put there.”

Ken Murphy, WBA’s president of Global Brands, described a long-term opportunity to “support transformation of Walgreens into a beauty destination.” For a glimpse into Walgreen’s potential beauty future, see My Visit to Boots UK: An International Pharmacy Photo Essay.

This focus is not surprising. Walgreens’ management team is now packed with former Boots executives. Compared with Walgreens, Boots UK pharmacies depend far less on prescription revenues. Here’s a look at the respective businesses’ sales mix, created from data in November’s proxy filing: 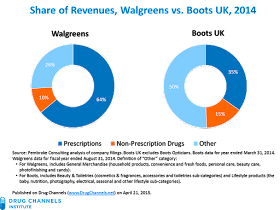 Despite the coming Euroflavor, Stefano Pessina, acting CEO and architect of the WBA combination, cautioned that the company will not necessarily be replicating the Boots model in the US:


"We have to also remind ourselves that many British retailers who came to the US were not particularly successful. Because you don't have to make the mistake to think that the markets are always identical. There are similarities, but there are also a lot of differences."

BTW, WBA’s apparent retail-centric perspective contrasts with competitor CVS Health’s growing focus on becoming a broader healthcare business. It will be interesting to watch these divergent approaches play out.

2. Walgreens is preparing for pharmacy hypercompetition.

Everyone should read Jeff Berkowitz’s comments on the pharmacy industry’s current competitive dynamics, which you’ll find on page 34 of the Day One transcript.

Here’s his useful summary of three key forces of change:


"First, you've got drug mix and cost, essentially the slowing down of the generic wave and cost of goods inflation that we all hear so much about.

Second, we simply face pure reimbursement pressure. This is being ultimately driven by government end payers in many places as well as continued consolidation of commercial payers and it's not likely to abate in the near-term. Constant pressure on reimbursement is our new normal.

Third, we see shifting pools of market access. Some of this is insured lives moving to different segments like managed Medicaid, but the other shift is the growth of restricted or narrow pharmacy networks as we often call them."

He also shared this clever chart, which succinctly summarizes what keeps (or should keep) pharmacy industry executives awake at night. 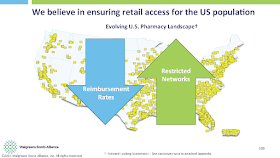 Many independent pharmacy owners and their trade association complain incessantly about the twin trends shown above. But whining won’t change the challenging competitive realities of today’s healthcare markets. As the late senator Daniel Patrick Moynihan said: "Everyone is entitled to his own opinion, but not his own facts." (FYI, that’s also my philosophy of life.)

3. Walgreens will emphasize the importance of payer relationships.

Given payers’ crucial role in pharmacy economics, Gourlay appropriately stressed that Walgreens "will improve [its] access to lives and relationships with payers to address reimbursement." Berkowitz expanded on this theme:


"We firmly believe that our customers want and should be able to enjoy access to Walgreens. If we are walking away from business based on a single data point, we miss the big picture and our objective is simple: maintaining robust and profitable access to Walgreens for the US population. That is what we are in business for. People have to be able to come to our stores and fill their prescriptions."

Gourlay and Berkowitz also highlighted a need to reset payer relationships, introduce the new management team, and change payers’ mind about Walgreens. It’s a big shift from the previous management team’s seeming obliviousness to marketplace realities. More on that topic below.

As far as I know, Jeff Berkowitz’s overview of Walgreens’ specialty business was the most extensive information that the company has ever presented on the topic. Given specialty’s importance, I was surprised to hear so few specifics.

For instance, how big is Walgreens specialty business? In The Top 10 Specialty Pharmacies of 2014, I estimate that 2014 revenues were $8.5 billion. Will the company ever tell us if I’m close?

Berkowitz even disclosed (for the first time) that two-thirds of the company’s specialty business goes through Walgreens pharmacies, while the remainder is central fill. That’s more than double my previous estimate. I’d speculated that less than one-third of Walgreens’ specialty volume was dispensed in the stores. It’s also a sharp contrast to CVS Health’s Specialty Connect program, which I discuss in February’s New Details on CVS Health’s Specialty Connect Program.  Hmmm...

5. Significant cost cutting is coming to the US pharmacy business.

Berkowitz also highlighted the lower store inventories of prescription drugs that have resulted from WBA’s relationship with AmerisourceBergen. Alas, he presented an impossible-to-interpret line chart with unlabeled axes. Perhaps it was an homage to previous management’s penchant for opaque disclosure?

For background on the WBA-ABC relationship, see section 6.5.3. of our 2014-15 Economic Report on Retail, Mail, and Specialty Pharmacies.


"As the market changes, building an even better Walgreens is about recapturing our position as America's most loved pharmacy. The reality is we are no longer number one in pharmacy volume, and no one here is okay with that." (Emphasis added)

And check out Berkowitz’s telling comment about network participation decisions:


"For so long we were almost singularly focused on an internal benchmark of gross profit per script, for all intents and purposes drawing a line in the sand of what was internally perceived as appropriate reimbursement, not a very market-focused approach."


"[T]the most frequent and most profitable and most successful opportunities I have seen in my business, my career, have been situations where good businesses have simply lost their focus on the basic principles of good and efficient management. And we have been able to inject this culture of basic business discipline back into them."

Let’s face it. The previous management team often made ludicrous statements that were completely at odds with reality here on planet Earth. Consider their delusional beliefs about exiting the Express Scripts pharmacy network. In December 2011, the old management team put out a laughable chart suggesting that Walgreens could retain 70% of Express Scripts prescriptions. I highlighted this “analysis” in May 2012’s Walgreens is Losing Its Battle with Express Scripts.

Fun fact: Jeff Berkowitz is the only survivor from the previous Walgreens’ management team—and he’s been there less than three years!

The analyst meeting covered many other topics, including: international retail (slowing margins but growth ahead); the global wholesale business (unspectacular platform businesses with good cash flow); the AmerisourceBergen partnership (valuable and likely expanding); WBAD (better-than-expected synergies); and future transactions (yes, but not yet and possibly not M&A).

All in all, there’s a lot to digest in this inaugural WBA analyst meeting, even though the meeting was a bit light on financial details. Let’s hope the WBA team will pop out more transparency than previous Walgreens management.
Adam J. Fein, Ph.D. on Wednesday, July 08, 2015