Retail generic drugs usually get cheaper over time, but my previous analyses have documented substantial generic inflation. Our latest exclusive investigation, however, finds that generic inflation may be easing.

During the first quarter of 2015, generic drug price increases were low compared with our two most recent examinations. We also found no drugs with mega-increases (exceeding 1,000%).

While inflation has slowed, generic drugs that have experienced cost increases haven’t necessarily become cheaper. As I show below, the actions of the Food and Drug Administration (FDA) have prevented new supply from entering the market.

But as the FDA’s backlog of 4,000 applications starts to clear, generic costs will start deflating. Until then, expect some generics to remain costly and inflation to continue.

I compared:
Note that I define a drug as an ingredient/strength combination, so that each manufacturer’s version of the same drug has the same price in the analysis. (This is a limitation of the NADAC data.) If I had considered each manufacturer's version of an ingredient/strength combination to be a separate drug, then the sample size would have been five to six times larger.

The chart below shows the frequency distribution of year-over-year acquisition cost changes from April 2014 to April 2015. 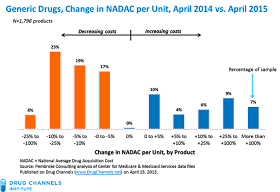 These results show less annual inflation compared with the findings of my previous analyses.
QUARTERLY CHANGE

The chart below shows acquisition cost increases during the first calendar quarter of 2015. About half of the generic drugs increased in cost, just as they had in our most recent analysis. For the first quarter of 2015, however, the increases were much lower than those in our previous quarterly examination. 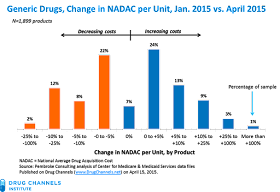 There are some important differences from our most recent quarterly analysis: 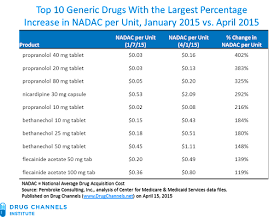 New supply is also being limited by the FDA’s enforcement actions. Here’s what Eric Percher of Barclays Capital wrote after the recent Barclays 2015 Generic Symposium:


Barclays Asia Healthcare & Pharmaceuticals analyst, Balaji Prasad, shared insights from his third annual India HC trip. The most important finding was that expanding FDA action is likely to sustain generic inflation. As the FDA’s scrutiny moves from data integrity to interpretation of guidelines, it is evident that only 5-7 Indian generic manufacturers possess truly strong compliance. Consequently, many of the Indian generic manufactures who would be most likely to compete in the U.S. on the basis of price have been unable to access the market.”

There may be good reasons to keep certain suppliers out, but the FDA’s sluggish response generates higher prices and ongoing inflation. Here’s an insightful chart from Randall Stanicky at RBC Capital Markets. As you can see, the backlog at FDA has grown from 2,866 files in 2012 to roughly 4,000 today. Meanwhile the number of annual approvals has dropped. 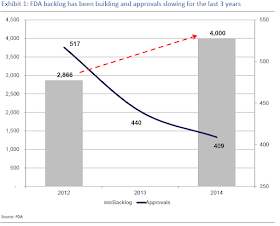 If she makes good on this promise, then competition will drive down generic prices within 12 to 18 months. Let's see if the FDA can act.