Zarxio: How Channel Dynamics Will Limit the First U.S. Biosimilar

Before payers start counting their billions in savings, let’s disentangle hype from reality for this first biosimilar. As I argue below, reimbursement and channel dynamics will slow Zarxio’s adoption. Other biosimilars may have different market dynamics.

I also speculate about how commercial payers could accelerate adoption by altering benefit coverage and increasing specialty pharmacies’ role. Not that there's anything wrong with that...

FISH IN THE DARK

The Patient Protection and Affordable Care Act created an approval pathway for biological products in the part of the law known as the Biologics Price Competition and Innovation Act (BPCIA). Under the BPCIA, a biological product may be demonstrated to be “biosimilar” if data show that, among other things, the product is “highly similar” to an already-approved biological product.

In August 2014, Sandoz announced that the FDA had accepted its filing for filgrastim, a biosimilar for Amgen’s Neupogen. Sandoz had filed for approval under the BPCIA’s pathway. In January 2015, an FDA advisory panel recommended that the agency approve the Sandoz product, concluding that it is highly similar to (but not necessarily interchangeable with) Neupogen. The Sandoz biosimilar filgrastim is already marketed in more than 40 countries outside the U.S.

Payers enthusiastically embraced Zarxio’s approval. Express Scripts, for instance, claimed that a Neupogen biosimilar would save $5.7 billion over 10 years. Prime Therapeutics was more circumspect, noting that “a robust market for biosimilars may be in jeopardy if regulators and lawmakers on federal and state levels adopt adverse regulations that create steep hurdles for biosimilar manufacturers.” (source)

Here are my initial observations on Zarxio’s market dynamics:

The products are not interchangeable. The FDA concluded that “there are no clinically meaningful differences between ZARXIO and US-licensed Neupogen.” In most states, pharmacists either can (or must) substitute therapeutically equivalent generics in most states. The new product, however, does not share the same scientific name as Neupogen. Indeed, the FDA designated the product’s name to be “filgrastim-sndz.” The suffix indicates that the product is manufactured by Sandoz. Zarxio can be best described as “therapeutically similar” and can’t be automatically substituted.

The products will (likely) not share a J-code. Given the different names and non-interchangeability, I presume that Neupogen and Zarxio will not share a Healthcare Common Procedure Coding System (HCPCS) J-code. Average Sales Price (ASP) for the products will also be reported separately. By contrast, the two interchangeable versions of epoetin alfa—Epogen and Procrit—share a series of J-codes. The Centers for Medicare & Medicaid Services (CMS) assigns HCPCS J-codes within one to two years after launch, so Zarxio will fall into the “miscellaneous” category when it launches.

Medicare Part B is the biggest payer for provider-administered oncology products, so physician practices’ drug reimbursement for filgrastim is determined by the ASP-plus formula. About half of commercial health plans follow Medicare and use the ASP benchmark for provider-administered specialty drug reimbursement. If Sandoz were to offer significant discounts and rebates, then Zarxio’s ASP would decline and providers would earn less.

Providers lack automatic financial incentives for substitution. Currently, HCPCS J-codes for multiple-source drugs—drugs with generic versions—include products from multiple manufacturers. In Medicare Part B, there is a lag between the time of a manufacturer’s sale and when the sale becomes the basis for an ASP payment amount. The lag lets wholesalers and providers automatically earn higher spread profits during the period of generic substitution. (See pages 63-64 and Exhibit 32 in our 2014–15 Economic Report on Pharmaceutical Wholesalers and Specialty Distributors.) By contrast, Zarxio will not generate the same profit motivations that an interchangeable generic product does. (NOTE: See the featured comment below for additional perspective.)

The specialty pharmacy impact will be minimal…unless payers change channels. Like filgrastim-sndz, many upcoming biosimilars are provider-administered specialty products. Specialty pharmacies dispense a very small volume of these products.

Could Zarxio encourage commercial payers to start requiring that providers use specialty pharmacies to obtain specialty drugs administered in a medical setting? Almost one-third of payers mandate that oncologists acquire in-office injectable and infused drugs from a specialty pharmacy, a.k.a., white bagging. (See section 3.7.4 in our new 2014–15 Economic Report on Retail, Mail, and Specialty Pharmacies.) Will Zarxio accelerate a coverage shift from medical to pharmacy benefit coverage? 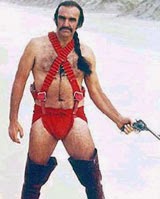 Zarxio should not be confused with Zardoz, a 1974 sci-fi movie starring Sean Connery and an unfortunate outfit.

As you can see, there are sartorially meaningful differences between Connery’s character and James Bond…
Adam J. Fein, Ph.D. on Tuesday, March 10, 2015