With the Cordis Deal, Cardinal Goes Its Own Way With Med-Surg

It’s a sensible transaction that continues Cardinal’s diversification from its core drug distribution business. For its overall business mix, Cardinal is following a different path than AmerisourceBergen and McKesson. Cordis also provides Cardinal with some intriguing international expansion opportunities. See my analysis below.

In 2013, Cardinal Health completed its acquisition of AssuraMed (now called Cardinal Health at Home), a distributor of medical supplies for home healthcare. AssuraMed included: (1) Edgepark Medical Supplies, which markets to patients, and (2) Independence Medical and Invacare Supply Group, which is a wholesale distributor to home medical equipment providers, pharmacies, and home health agencies. In 2012, AssuraMed had revenues of $1 billion. Other acquisitions include Emerge Medical, Access Closure, and Innovative Therapies.

In its most recent fiscal year, Cardinal Health’s medical segment accounted for 12% of the company’s total revenues, but 23.5% of its corporate profits. (See Exhibit 70 of our 2014-15 Economic Report on Pharmaceutical Wholesalers and Specialty Distributors.) By 2017, the segment could account for 27% to 28% of Cardinal’s profit. At peers McKesson and AmerisourceBergen, non-pharma distribution businesses account for less than 10% of revenues and profits.

With the Cordis deal, Cardinal continues its growth-by-acquisition strategy in the medical device manufacturing business. Cordis’s products are most complementary with those of Cardinal’s previously acquired Access Closure.

In this slide deck, Cardinal lays outs its rationale for the Cordis deal. Here’s the key slide explaining the synergy and fit of the Cordis business. 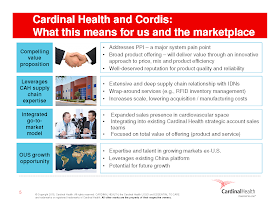 According to Cardinal, medical supplies and devices account for 15% of U.S. hospitals’ spending, while pharmaceuticals account for only 6%. Despite med-surg’s comparatively slower growth, Cardinal sees more opportunity there than that its distribution peers do. In 2006, McKesson sold its acute-care medical-surgical distribution business to Owens & Minor. AmerisourceBergen, meanwhile, has no significant med-surg business and isn’t eager to acquire one.

BABY I’D GIVE YOU MY WORLD

As the map below shows, Cardinal/Cordis operates in more than 50 countries. The U.S. accounts for only 30% of Cordis’ revenues. Will it provide Cardinal with a suitable entry point to global markets? 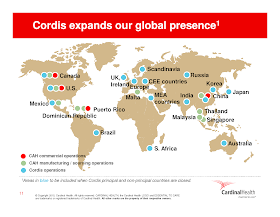 The largest, U.S.-based pharmacies and wholesalers are all expanding significantly outside North America. Unlike AmerisourceBergen and McKesson, Cardinal has no commercial operations in Europe or South America.

In 2010, Cardinal Health entered China, which accounted for $2.6 billion of its FY2014 revenues. Cardinal is the only U.S.-based wholesaler with a significant presence in China, which should provide another global opportunity for Cordis products.

Chalk up this transaction to George Barrett’s vision to have Cardinal participate throughout a patients’ care continuum. The Big Three wholesalers now look more different than ever.