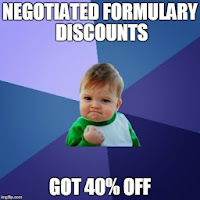 This week, Gilead Sciences reported blockbuster 2014 results for its hepatitis C products Sovaldi and Harvoni. Read the press release. However, Wall Street freaked out when Gilead disclosed that its payer discounts are much larger than many people had assumed—more than 50% off list in some cases. (See the numbers below).

These unexpectedly large price cuts provide more evidence that competition gives payers enormous power, even when purchasing differentiated, highly valuable therapies. Imagine what will happen as biosimilar versions of top-selling biological drugs hit the market over the next few years.

Sorry to be the bearer of bad news. But for the manufacturers developing biosimilars and those defending biological products, it’s probably time to lower revenue projections.

Gilead’s hepatitis C portfolio lived up to its legendary reputation. In 2014, Solvaldi’s U.S. sales were $8.5 billion, and Harvoni’s U.S. sales were $2.0 billion. Sovaldi remains the most successful drug launch in history, per Sovaldi: The Legendary Blockbuster.

Once AbbVie launched Viekira Pak, however, a formulary price war erupted. See How PBMs Profit From the Hepatitis C Formulary Wars...And What It Means for Specialty's Future.


"We expect our 2015 growth to net adjustments for our HCV products in the United States to be approximately 46% or a little more than double of that where we ended 2014 which was around 22%. This increase is the result of the recent and ongoing round of negotiations with payors and PBMs and includes the shift towards a higher proportion of public payors and high prescribing of Harvoni amongst those payors with rebates to payors such as the Medicaid and the VA exceeding 50%." (source)

Yes, you read that right. Gilead expects that its gross-to-net adjustment will more than double in 2015. In other words, its average net selling price will be 46% below its wholesale acquisition cost (WAC) list price.

That discount blends government and commercial payers. Gilead revealed that 70% of 2014 sales came from commercial lives. Given deals with government payers, the commercial share will likely decrease in 2015. With a little algebra, it implies a commercial discount of 30% to 40%, which is greater than many analysts had expected. 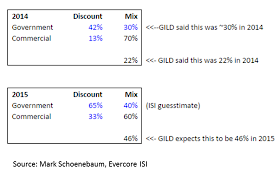 The Patient Protection and Affordable Care Act created an approval pathway for biological products that are “highly similar” to an already-approved biological product. By 2020, 12 biological products with global sales of more than $67 billion could face biosimilar competition. For more on the outlook for biosimilars, see section 8.4.5 (page 158) of our new 2014–15 Economic Report on Retail, Mail, and Specialty Pharmacies.

These biosimilars are unlikely to be fully interchangeable with their innovator products. Competition between a biologic drug and a biosimilar is much more likely to resemble brand-to-brand competition than it is to resemble the dynamics of brand-to-generic competition.

As a result, the conventional wisdom—summarized in this still relevant 2009 Federal Trade Commission (FTC) report—believes that a biosimilar’s discount will be only 10% to 30% off the innovator’s price.

However, the large hepatitis C discounts suggest that biosimilars may drive deeper discounts for formulary placement. Although the hepatitis C products are not therapeutically equivalent, we are seeing big discounts to both government and commercial payers.

On its earnings call, Gilead argued that higher patient volumes would partially offset the deeper discounts. But biological products may face as many as three competing biosimilars, so a race to the bottom could ensue as multiple companies vie for patients.