How Rite Aid is Benefiting from Its New McKesson Relationship

As you may recall, in 2014 Rite Aid shifted to direct-store-distribution by McKesson, and turned over generic purchasing to McKesson. (For background, see McKesson, Rite Aid, and the Changing Generic Channel.)

Rite Aid’s latest quarterly results show significant benefits in generic purchasing, profits margins, and inventory management. Days sales in inventory has decreased by 12% and likely to drop further. (See the chart below.) If Rite Aid keeps posting such positive results, expect other large pharmacy buyers to give in the towel and begin sourcing generics through the large wholesalers.

As a bonus, Rite Aid CEO John Standley also explained how the pharmacy industry’s evolutionary dynamics are just like Alice in Wonderland’s Red Queen. Well, that’s what I heard…

INVENTORY DOWN THE RABBIT HOLE


”As you know, one of our most important initiatives of the year has been our conversion to a new drug distribution and purchasing process with McKesson, which is providing us with purchasing efficiencies and direct-to-store delivery for all our pharmacy products. As reported, during our last earnings call, all stores and our four pharmacy distribution centers were converted to this new distribution process by early in the third quarter. With all of our stores receiving direct-to-store delivery five days a week, we expected to generate working capital benefits and improved in-stock positions to better serve our customers. These benefits were in line with our expectations during the third quarter.”

Translation: Rite Aid is benefiting from reduced working capital, due largely to lower pharmacy and distribution center inventories. The company reported that “FIFO inventory was lower than the third quarter of last year by approximately $255 million, driven by a reduction in pharmacy inventory resulting from our transition to direct store delivery from McKesson.”

The chart below shows total inventories and our computation of Rite Aid’s Days in Inventory. 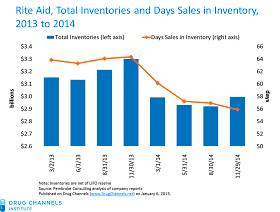 
”…the reduction in inventory has sort of offset most of whatever inflation effect there would be. So, I think, going forward, there will be some LIFO charge. We still have some opportunity I would say particularly on the store side. I mean, what we have done so far is largely taken out distribution center inventory. So there is still some opportunity to take out some more inventory next year on the store side. So we could still see some of that offsetting activity next year as well.”

While Rite Aid’s distribution center inventory is gone, the quote above indicates that the company is still maintaining higher-than-needed store inventories. So, total inventories could drop further.

As part of the new arrangement, Rite Aid turned over its purchasing and distribution of generic pharmaceuticals to McKesson. This deviated from the historical pattern in which large retail chains have bought brand-name drugs—but not generics—via a drug wholesaler rather than directly from a manufacturer.

Standley noted that Rite Aid had done “much better than we expected on the McKesson side.” Thus, the company reported lower acquisition costs and corresponding higher gross profits.

In November, Omnicare switched its generic sourcing to McKesson's wholesale channel. Expect more such deals in 2015.

THE RED QUEEN OF PHARMACY

In Lewis Carroll's Through the Looking-Glass, Alice competes in the Red Queen’s race. Alice keeps running, but stays in place.

In evolutionary theory, this metaphor has been adapted as the Red Queen hypothesis, which proposes that organisms must constantly adapt, evolve, and proliferate to survive while pitted against ever-evolving opposing organisms in an ever-changing environment. (Source)


“[T]he way to think about it is every year I’ve been here, we have always found a way to purchase a little better than the year before and that’s our expectation that those trends will continue. And reimbursement rates will inevitably come down to some degree over that same period of time. And the balancing act that we always talk about is trying to get cost and reimbursement rate to line up.”

As the Red Queen says:


"You may call it nonsense if you like, but I've heard nonsense, compared with which that would be as sensible as a dictionary!"