Once again, independent pharmacy owners are doing better than you might expect. In 2013, overall profits increased (again), while the average pharmacist owning a single pharmacy earned about $247,000. The number of independent pharmacies continues to hold steady.

As always, I welcome your constructive comments. Just remember our Drug Channels philosophy, courtesy of the late senator Patrick Moynihan: "Everyone is entitled to his own opinion, but not his own facts."

The 2014 NCPA Digest, Sponsored by Cardinal Health publishes 2013 financial and operating data submitted by pharmacy owners. It remains the only consistent source of pharmacy owners’ financial data. (Below, I consider the Digest’s strengths and weaknesses.)

This year, NCPA decided not to release the detailed financials. Perhaps NCPA didn't want to advertise the good profit news. (Plausible deniability?) However, a little algebra plus some educated guesswork gives us everything we need.

Here are my previous analyses of these data:

Gross profit equals a pharmacy’s revenues minus the costs of products (net of discounts and returns) bought from a manufacturer or a wholesaler. Gross margin expresses gross profit as a percentage of revenues. A drugstore’s total revenues come from prescription drugs, over-the-counter products, vitamins, cosmetics, groceries, and other merchandise. A typical independent pharmacy generates more than 90% of its revenues from prescriptions.

To be profitable, a pharmacy’s gross profits must exceed its operating expenses. For example, increasing Owner Compensation will decrease operating profit. A pharmacy could report a “net loss” if the pharmacy owner chose to pay himself or herself a larger bonus instead of reporting a positive net profit.

For more on pharmacy and prescription economics, see Chapters 5 and 7 of the 2013–14 Economic Report on Retail, Mail, and Specialty Pharmacies.

In 2013, independent pharmacies' overall gross margin from prescription and non-prescription products increased by 10 basis points, to 23.3%. This is the third year in which profit margins grew. 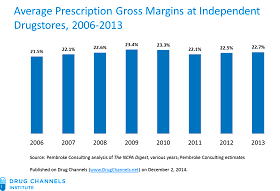 The Digest's average per-pharmacy revenue increased slightly (+1.0%). However, average revenue has dropped slightly from its peak of $4.0 million, in 2009, to $3.9 million in 2013. The revenue decline is due to brand-to-generic substitution, not volume. Total prescriptions per pharmacy have increased over the past few years.

Since NCPA no longer publishes financial details, I multiplied last year’s median Owner’s Discretionary Profit (ODP) figure by average revenues. On a per-pharmacy basis, this figure grew, from $245K in 2012 to $247K in 2013 (+1%). The increase reflects higher pharmacy margins in the 2013 sample.

Note that a pharmacy owner earns more than twice the salary of a employed pharmacist, per For 2013, Pharmacist Salaries Rise Yet Again For This Family-Friendly Occupation.

OBSERVATION 4: The average pharmacist owning multiple pharmacies earned about $900,000 in 2013.

The NCPA Digest reports that in 2013, 27% of the Digest’s sample owned two or more pharmacies. With a bit of algebra, I computed that this 27% of the sample owned an average of 3.6 pharmacies. The remaining 73% owned a single pharmacy. In either case, these owners must be pharmacists to meet the NCPA’s definition of “independent pharmacy.”

Total profits for multiple-pharmacy owner could be lower than this figure, because the owner may need to pay pharmacists to work in the different stores.

Since NCPA has hidden the financial data, we don’t know how many pharmacies supposedly “operate at a loss.” Last year, the Digest claimed that 24.3% of pharmacies were operating at a loss, compared with 23.6% in 2011.

Miraculously, the industry has not been collapsing. And if you understand the above components of gross profit, you'll see why such "operating at a loss" figures are completely bogus. A net loss may simply mean that the owner drew a salary and bonus that pushed the business’s net profit figure into an accounting loss. As the data demonstrate, the profit story for pharmacy owners remains good.

For more on the outlook for independent pharmacies (along with the implications for pharmaceutical wholesalers), see pages 18-28 in 2014-15 Economic Report on Pharmaceutical Wholesalers and Specialty Distributors.

Here’s a quick summary of the NCPA Digest’s strengths and weaknesses.