It’s fashionable to blame healthcare spending growth on pharmaceuticals, but it’s also inaccurate. In 2013, prescription drug spending grew by 2.5%, which was 110 basis points behind the 3.6% growth in overall expenditures.

Our analysis also shows that spending on hospital care and physician services, which account for a majority of healthcare expenditures, grew more quickly than drug spending. See the chart below.

CMS projects that these trends will reverse in 2014, because of healthcare reform’s rollout and Sovaldi’s legendary launch. Until then, don’t blame drugs.

Expenditure (spending) data differ from those of pharmacy revenues, manufacturer sales, and provider purchases. NHE totals are net of manufacturer rebates, so the reported figures are lower than pharmacies’ prescription revenues and IMS Health "non-discounted" figures. The NHE data also do not measure total U.S. spending on prescription drugs, because these data exclude an indeterminate amount of inpatient spending on pharmaceuticals. Thus, U.S. drug spending in the NHE is roughly equivalent to total outpatient pharmacy revenues minus manufacturer rebates.

In CMS Forecast: Big Drug Spending Growth, But Hospitals and Doctors Will Still Capture Most Healthcare Spending, I reviewed the 2023 forecast, which was based on historical data through 2012.

What’s more, drug spending grew more slowly than the other categories. See the chart below. 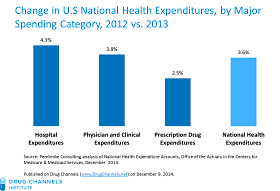 In my next post, I’ll examine payer trends behind the 2013 prescription spending numbers.