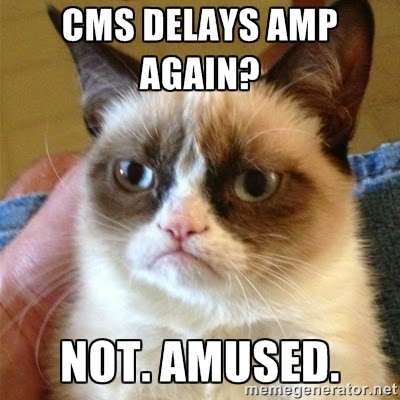 In what has become a semi-annual ritual, the Centers for Medicare & Medicaid Services (CMS) last night announced plans to delay the Federal Upper Limits (FUL) and the Final Rule on Covered Outpatient Drugs, a.k.a., the Average Manufacturer Price (AMP) Final Rule. Full text of the non-announcement email below.

In its email, CMS confirms that it will do something, at some point in the future, and that it looks forward to partnering with stakeholders whenever it does the thing that it may or may not ever do.

Meanwhile, we'll all just muddle along without clarity on AMP computations, bona fide service fees, the definition of retail pharmacy, and more. It's enough to make any cat grumpy about the Affordable Care Act's implementation.

Here’s the latest CMS email, which is a genuine masterpiece of bureaucratic nonspeak. Caveat lector.


“This notification is to update stakeholders on the anticipated finalization of the Affordable Care Act federal upper limits (FUL) for multiple source drugs as provided in the recently released CMCS Informational Bulletin.

We expect to release the finalized Affordable Care Act FULs at or about the same time that we publish the Medicaid Covered Outpatient Drug final rule (CMS-2345-F). At that time, we also plan to issue formal detailed guidance to the states to implement the Affordable Care Act FULs. This will include the information that the states will need to include in their state plan amendments, including detailed timelines for compliance.

We look forward to continuing to partner with you as you apply the provisions of the Affordable Care Act.”

If you’re curious, my June 2014 note highlights a some important implications about AMP and FULs. Manufacturers and wholesalers should see my discussion of bona fide service fees on pages 50-52 of  the 2014-15 Economic Report on Pharmaceutical Wholesalers and Specialty Distributors.