Here’s Who Will Pay For Prescription Drugs in 2023

In CMS Forecast: Big Drug Spending Growth, But Hospitals and Doctors Will Still Capture Most Healthcare Spending, I examined the September 2014 drug spending forecasts from the Centers for Medicare and Medicaid Services (CMS).

After crunching the numbers again, I identified new insights into the 2023 drug market. As the charts below show, CMS expects that the employer-sponsored insurance market will shrink more than it had previously projected, while Medicare and Medicaid will grow even faster. CMS is still projecting that individually-purchased private insurance (via both public and private exchanges) will account for a small share of drug spending.

Is your organization prepared for the government’s unprecedented growth?

I rely on the September 2014 National Health Expenditure Data projections. The industrious CMS boffins separate private health insurance spending into two subcategories:
I refer to the latter category as Individually-Purchased Private Insurance. CMS projects that within a few years, growth in this spending category will come primarily from people who purchase private insurance via state marketplaces. 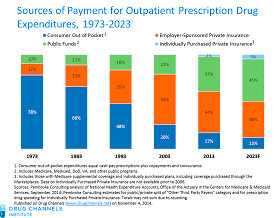 Here’s what CMS is projecting:
The chart below shows changes in absolute spending, by payer. 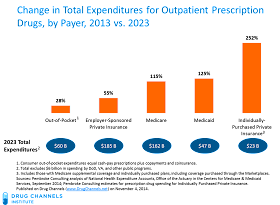 Most of the government’s spending will be managed by private companies, via Medicare Part D prescription drug plans, Managed Medicaid, and private insurance purchased on the public exchanges. But the latest CMS projections show that the government’s behind-the-scenes influence will be far greater than it is today.

Is the pharmaceutical industry ready?