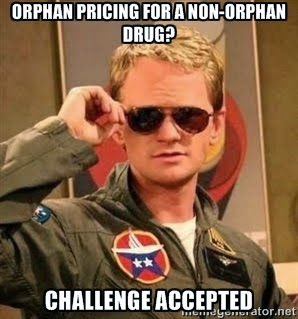 Mark Schoenebaum of ISI Group compared hepatis C treatment Sovaldi’s launch to the launch of such other legendary drugs as Avastin, Gleevec, Revlimid, and more. Based on the chart below, I think you’ll agree that Sovaldi is the most legendary of them all. Competitive launches and Sovaldi’s successor Harvoni will slow Sovaldi’s growth, but until then…wow!

Despite ongoing criticisms of Sovadi’s pricing, patients and physicians clearly want this biomedical innovation—and wholesalers, pharmacies, and PBMs have come along for the ride.

The chart below compares quarterly U.S. sales for seven specialty drugs since their launch dates, which appear beside each drug’s name. Sovaldi's U.S. sales were $7.5 billion in its first four quarters. 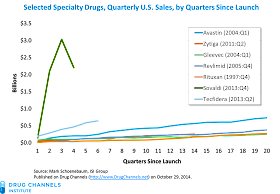 In PBM-Owned Specialty Pharmacies' Financial Win From Sovaldi, I highlighted Leerink analyst David Larsen’s estimates that CVS Caremark and Express Scripts gained as much as $600 million in revenues from Sovaldi first quarter sales. These gains have only grown, along with Sovaldi’s sales.

Sovaldi is distributed by a network of 13 wholesalers (listed here), so the Big Three wholesalers—AmerisourceBergen, Cardinal Health, McKesson—also are benefiting from this legendary windfall.

As Wall Street analyst Barney Stinson noted, Sovaldi’s launch has been legen—wait for it—dary. Suit up for more HCV drama.