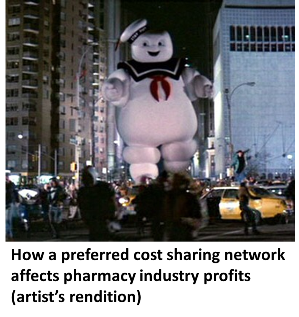 Today, I examine the pharmacy chains in the biggest plans’ networks. Walmart again leads the pack in preferred network participation. Walgreens has a big bet on preferred networks, while CVS and Rite Aid have been more cautious. Independent pharmacies feature prominently in many plans, which should—but probably won't—mute critics of preferred networks.

Read on for our exclusive look at 2015’s preferred network participants, along with some comments on DIR fees and pharmacy profits.

BACK OFF, MAN. I’M A SCIENTIST.

Based on online plan summary information, I developed the table below, which summarizes the top seven retail pharmacy chains’ participation in major preferred networks. Click here to download the table as a PDF file. 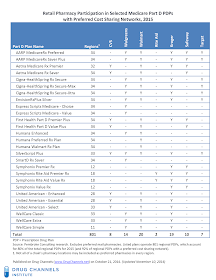 If a chain participates as a preferred pharmacy, all of its brands usually participate, too. Thus, Walmart includes Walmart, Sam's Club, Neighborhood Market pharmacies, and Walmart Express. However, not all of a chain’s pharmacy locations may be included as preferred pharmacies in every region.

Observations:
WE’RE READY TO BELIEVE YOU!

The pharmacy industry may not cheer these results, because the preferred networks’ cost savings come primarily from lower pharmacy margins.

Pharmacies are willing to accept reduced reimbursement rates in exchange for participation in a preferred cost sharing network. In Medicare Part D, the reduction comes from per-prescription fees that a pharmacy pays to a PDP. The fees, which are called Direct and Indirect Remuneration (DIR), are often computed as a percentage of the pharmacy’s reimbursement. Thus, the DIR fee directly reduces the pharmacy’s margins and the plan’s costs.

The Centers for Medicare & Medicaid Services (CMS) has repeatedly expressed concern about the way different Part D sponsors report these fees. CMS recently proposed draft guidance for Part D sponsors’ reporting of DIR data for pharmacy price concessions. (See Direct and Indirect Remuneration (DIR) and Pharmacy Price Concessions.) CMS believes that “most pharmacy price concessions can reasonably be determined at point of sale and, therefore, should be reported through the negotiated prices.” Hope you didn’t want to share your views, because comments were due last week.

In January, we’ll get our first look at enrollment data. So, I have three months to work on my collection of spores, molds and fungus. Cool.

NOTE: On November 10, 2014, the participation chart above was updated with the following changes: