EXCLUSIVE: For 2015, almost 9 out of 10 Medicare Part D plans will have a preferred pharmacy network 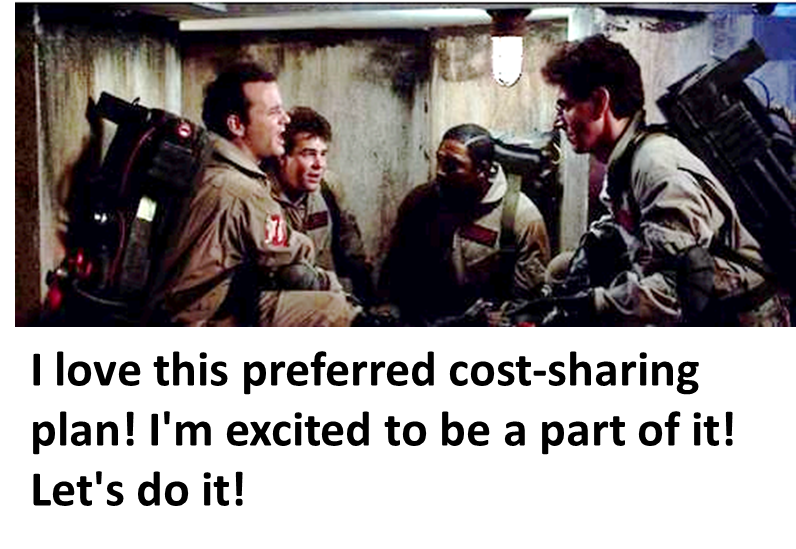 Tomorrow, Medicare Part D kicks off its open enrollment period. Through December 7, America’s seniors can keep their current plan or switch to a new one.

Who ya gonna call to understand the latest preferred pharmacy network trends? Drug Channels, of course!

For 2015, our analysis reveals that an astonishing 87% of Medicare Part D regional prescription drug plans (PDP) will have a preferred cost sharing network. That’s a big Twinkie!

Read on for our exclusive look at the 2015 Part D landscape, which includes insights on the major health plans—UnitedHealthcare, Humana, Express Scripts, et al—behind the PDPs.

Are pharmacies headed for a disaster of biblical proportions? In an upcoming article, I’ll look at pharmacy participation in the biggest plans’ networks.

Perhaps you’re thinking: “Adam, pretend for a moment that I don’t know anything about metallurgy, economics, or Medicare—and just tell me what the hell is going on.”

Well, in a PDP with a preferred cost sharing pharmacy network, a Medicare Part D beneficiary has the option of using any network pharmacy. However, any copayment or coinsurance will be lower at a preferred pharmacy. Thus, the preferred network model gives beneficiaries a choice of pharmacy, but also provides financial incentives to use the pharmacies that offer lower costs to the government.

The Part D preferred pharmacy network wave began in 2011, when Humana and Walmart launched their first plan. As I wrote at the time, it was An Inevitable Surprise for Pharmacies and PBMs. The Center for Medicare & Medicaid Services (CMS) now refers to the pre-chosen forms as “preferred cost sharing.” See New Part D Final Rule: What CMS Still Doesn’t Get about Pharmacies, PBMs, and Preferred Networks.

For a broader analysis the narrow pharmacy network trend, see chapter 8 of the 2013–14 Economic Report on Retail, Mail, and Specialty Pharmacies.

My proton pack includes only stand-alone PDPs. I eliminated these plans from the sample:
I included 56 plans that had been slimed (placed under sanction) as of September 2, 2014. CMS provides information for these plans, but they can’t accept new enrollees. All of these plans are either the SecureRx Option PDPs, offered by Avalon insurance Company, or the SmartD Rx PDPs, which Express Scripts acquired in 2013.

Here is a summary of the major companies offering PDPs, along with the split of preferred cost sharing vs. open pharmacy networks. 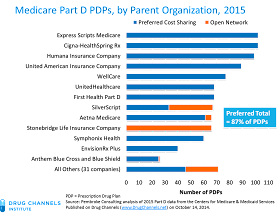 2015 highlights:
The initial 2015 enrollment data will be released in January. On Thursday, we’ll ponder whether pharmacies will know what it’s like to be roasted in the depths of the Slor.

P.S. This year, Ghostbusters celebrated its 30th anniversary. If that doesn’t make you feel old, then consider that a “female-centric” remake is now in the works. I ain’t afraid of no reboot?