On Tuesday, Walgreens released its latest quarterly earnings. During the investor call, Walgreens executives opened up (a little) about the company’s payer contracting problems and the generic drug inflation that triggered its billion-dollar forecasting blunder. Read the excerpts below and see what you think.

On the call, Walgreens also discussed a “significant step down” in its Medicare Part D reimbursement rates, beginning January 1, 2015. One day later, Express Scripts announced that its Part D Prescription Drug Plans (PDP) will have preferred retail pharmacy networks that include Walgreens and 18,500 other, unnamed community pharmacies. (Read the press release.) Working together, can they get the job done?

Here’s what President and CEO Greg Wasson said on Tuesday:


“In the fourth quarter, we continued to face headwinds to our pharmacy margin from ongoing pressure from reimbursement and generic drug inflation. To address the pressure on our pharmacy margin, we are focused on our contracting strategy to a lot of our payer contracts to the realities of an inflationary versus a deflationary market.”

The company expects these factors to persist, as this exhibit from Tuesday’s call shows: 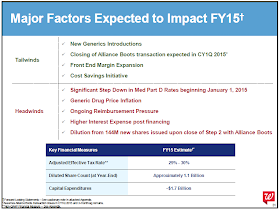 
“The dynamics under which generic drug manufacturers can avail themselves of pricing actions has not changed. They are able to raise prices when demand outpaces supply. These drug supplies can be impacted by a number of mechanisms including regulatory actions by the FDA resulting in the shutdowns of both API and finished dosage for manufacturing plants, generic drug manufacturer consolidation and portfolio harmonization, API manufacturer consolidation and FDA backlog on approvals as well as a shrinking pipeline of first to market generic blockbuster launches. Our current environment is experiencing all of these mechanisms and as a result, the average inflation in our basket of generic drugs is mid-single digit as measured on a comparable drug priced basis.”

That’s a reasonable summary. However, Walgreens has never satisfactorily explained why it was so disproportionately affected by this generic inflation.

The Wall Street Journal reported that the company “hadn't factored in, among other things, a spike in the price of some generic drugs that it sells as part of annual contracts.” (See my comments in the August news roundup.) Did Walgreens sign at-risk payer contracts with a fixed generic prescription payment? Such contracts would have been unhedged risks on generic deflation and superior sourcing.


“We have been developing contracting strategies to adjust it more proactively. We started to incorporate protections into our agreements that adjusted inflation dynamics that we're seeing and we have actually successfully incorporated some protective language in one of our first major renewables moving forward.”

Berkowitz dodged a follow-up question asking how many payer contracts have been adjusted to generic drug price inflation. Later in the call, he added:


“Just right now WBAD has been able to roll out a new and enhanced price protection policy with generic manufacturers that provides actually lengthier protection to Walgreen in an inflationary environment, providing more flexibility for us to develop alternatives and also more time to allow us dynamics to catch up.”

Given the Alliance Boots transaction and its AmerisourceBergen relationship, Walgreens’ finances have become incredibly complex. Stay tuned to see if Walgreens can dig in and fix its generic drug contracting problem.

An inside source provided this top-secret video of an important Walgreens’ planning session. Click here if you can’t see the video.