How Employers Are Managing Pharmacy Benefits in 2014

Today, I profile the pharmacy benefit highlights from this excellent survey. The charts below summarize (1) cost-sharing tier structures, (2), average copayments, by formulary tier, and (3) type of cost-sharing (coinsurance and copayment).

Bottom line: employers didn't make many major changes in the past year. Fourth-tier plans with substantial co-insurance remain a significant part of the market.

As a bonus, I also include a video with an intriguing forecast for the future of benefit tiers.

TOO MANY TEARDROPS FOR ONE SAMPLE

The 2014 report tracks health benefits at 2,052 firms, 90% of which offer health benefits to employees. Nearly all (99%) covered workers in these plans have a prescription drug benefit.

The survey’s sampling methodology is solid. Since many companies participate annually, the time trends are pretty reliable. About 77% of the firms that completed the 2014 survey also participated in the 2012 or 2013 surveys, or both.

Drug Channels readers will be most interested in the survey data on Prescription Drug Benefits (section 9). Unfortunately, the report provides very limited break-out of pharmacy benefit results by employer size, industry type, and other characteristics.

A pharmacy benefit covers outpatient prescriptions dispensed by a licensed pharmacy. For consumers with third-party pharmacy benefit insurance, the share of the prescription’s cost is usually linked to benefit cost tiers—categories that define the plan member’s copayment or coinsurance. In general, prescription drug plans financially reward patients for using generic and lower-tier drugs, by requiring the patient to pay progressively higher copayments or coinsurance for drugs on higher tiers. (For more background on pharmacy benefits, see Chapter 3 of the 2013-14 Economic Report on Retail, Mail, and Specialty Pharmacies.)

In 2014, the three-tier design—generic drugs, preferred brand-name drugs, and non-preferred brand-name drugs—is the most common, used in 60% of employer-sponsored plans. (See chart below.) However, plans with four of more tiers have grown from 3% of employer-sponsored plans in 2004 to 20% of these plans in 2014. There was a small (but statistically insignificant) drop in four-tier plans, from 23% of covered workers in 2013 to 20% in 2014. 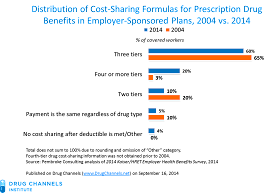 In the overall sample data shown above, a small percentage of plans have no cost sharing after deductible or do not vary copayments based on drug type. This result comes from the inclusion of employees in High-Deductible Health Plans with a Savings Option (HDHP/SOs), which have different cost-sharing patterns for prescription drugs than other plan types. Only 43% of covered workers in HDHP/SOs are in a plan with three tiers of cost sharing for prescription drugs. Fifteen percent are in plans that pay 100% of prescription costs once the plan deductible is met. 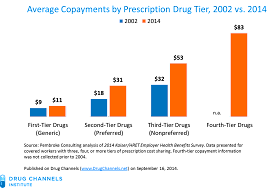 Average drug copayments in 2014 were comparable to 2013's copayments, i.e., not statistically different. However, first-tier drug copayments increased slightly, from $10 in 2013 to $11 in 2014. Perhaps a result of generic drug inflation?

On higher tiers, coinsurance is much more common than copayments. Almost half (49%) of covered workers have coinsurance for fourth-tier drugs, compared with only 11% of workers with coinsurance for first-tier drugs. Products on this top tier tend to be specialty or lifestyle drugs. For most people, this can create financial burdens to accessing newer specialty therapies. 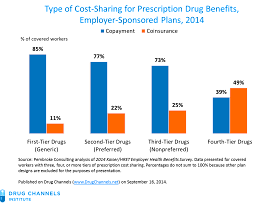 Coinsurance for fourth-tier drugs averages 29%, which means that a patient would pay more than $600 for an average specialty prescription of about $2,200. Most covered workers are in a plan that partially or totally limits out-of-pocket maximums. Chapter 7 of the Kaiser/HRET report discusses the various plan structures, although there are no pharmacy-specific survey results.

Over time, the number of pharmacy benefit tiers has expanded. Insurance experts ? & The Mysterians discuss the possibility that the number of tiers may expand very dramatically. Click here if you can’t see the video.