Buy-and-Bill’s Still Alive: The Surprising Uptick in Part B Spending

The latest MedPAC Part B spending data show a surprising increase in Medicare buy-and-bill spending for provider-administered drugs. (See chart below.) After a post-2005 slowdown, spending growth accelerated from 2009 through 2012.

Do these data of prove buy-and-bill’s resilience, or are they a pre-sequestration fluke driven by new therapies and a growing Medicare population? My speculations are below. If you feel brave, make a yummy sound with a comment of your own.

Medicare is the largest payer of provider-administered specialty drugs, and therefore a key player in the buy-and-bill system. For buy-and-bill background (BBB), see Chapter 3 (starting on page 36) and Chapter 6 (starting on page 98) in our just-released 2014-15 Economic Report on Pharmaceutical Wholesalers and Specialty Distributors.

Medicare’s Part B program covers provider-administered injectable drugs and certain other medications. The Medicare Prescription Drug, Improvement, and Modernization Act of 2003 (MMA) mandates that Medicare use a drug’s Average Sales Price (ASP) for reimbursing provider-administered injectable drugs. ASP is based upon the manufacturer’s actual selling price, i.e., a drug’s list price minus all price concessions. As of 2005, Medicare Part B switched from an Average Wholesale Price (AWP) base to Average Sales Price (ASP).

As the chart below shows, Medicare’s switch to ASP initially slowed the growth of Medicare Part B spending on outpatient drugs. After the 2005 change, total spending on provider-administered drugs declined by $800 million (-7.3%) compared with 2004 spending. Spending increased at a compound average growth rate (CAGR) of only 1.9% from 2005 through 2009, compared with an average annual growth rate of 21.4% from 1997 through 2004. 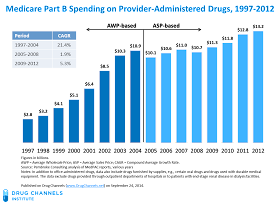 Many new specialty drugs are provider-administered, which should increase Part B spending. Here are some countervailing forces that could slow Part B growth:
Despite these obstacles, Part B’s growth demonstrates the ongoing relevance of the buy-and-bill channel, even as it is under pressure from commercial third-party payers. (See chapter 6 in the new 2014-15 wholesale report.) Medicare Part B still favors buy-and-bill, but don’t expect the government to be putting on the Ritz. I suspect the 2013 spending will not be as much fun as a roll in ze hay.