I’m taking a break from blogging this week and rerunning some of 2014's most popular posts. Click here to see the original post and comments from June 2014.

Alas, the top-line figures don’t tell the full story, because of methodology and data presentation differences. As I noted last year, a PBM’s drug trend report is the bikini of pharmaceutical economics. What it reveals is interesting, but what it conceals is essential. Read on for the figure-hugging details.

Here is a summary of 2013 drug trend for commercial plan sponsors, as reported by each company. 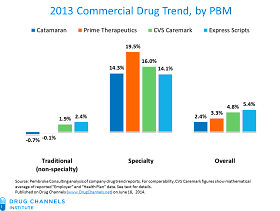 These reports, while chock full o’ interesting data, are primarily marketing documents, not peer-reviewed research studies. To see what’s really going on, check out this table summarizing the methodology behind the numbers. 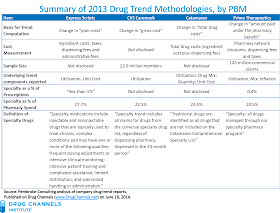 Observations and Methodological Mysteries:
Despite these limitations, I encourage you to read the reports for yourself. You may even learn something about U.S. drug costs.