Walgreens and Alliance Boots to Combine; No Inversion For You!

Walgreens and Alliance Boots today announced the accelerated formation of Walgreens Boots Alliance, Inc., a new US-based holding company. The transaction will close in the first quarter of 2015. Read the press release.

The company is (1) abandoning plans to do an inversion, (2) lowering its financial targets, (3) embarking on a $1 billion cost-cutting effort, and (4) reshuffling and combining the management teams. Stefano Pessina, who will be the combined company’s biggest shareholder, will have big strategic role. He’s reporting to Greg Wasson…for now.

Below are a few initial reactions, along with some selected slides from today’s conference call. Keep in mind that the second stage still requires shareholder approval. This is not a done deal.

Pharmaceutical manufacturers should immediately recognize that Walgreens Boots Alliance, Inc. will be a very big player in global pharmacy and wholesale channels. Here's how the company summarized the new entity's scope: 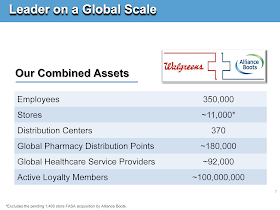 Here is a summary of the transaction's Step 2: 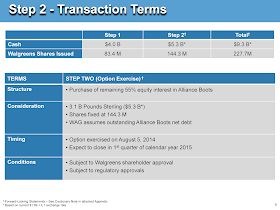 Back in March, President and CEO Greg Wasson was emphatically denying the possibility of such an inversion.  By June, he completely reversed course. As I noted last week, Walgreens' management neglected to get in front of this story, so politicians and anti-Walgreens activists led the narrative.

In today’s release, the company states that it “thoroughly evaluated” combining Walgreens and Alliance Boots under a foreign parent company. Here’s the key sentence from today’s press release:


“We took into account all factors, including that we could not arrive at a structure that provided the company and our board with the requisite level of confidence that a transaction of this significance would need to withstand extensive IRS review and scrutiny.”

Given the circumstances, this makes sense. When the U.S. president and Treasury Secretary start pointing fingers at your purported un-American activities, then “retreat” is a sound tactic.

Of course, it also illustrates how management had no voice in the public debate over Walgreens’ inversion. Even the no-inversion news was leaked on Tuesday by Sky News, which prompted this morning’s hastily-arranged press release and conference call. 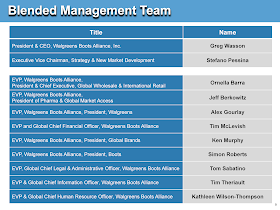